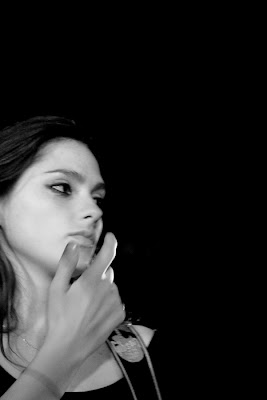 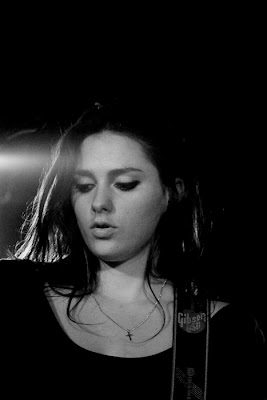 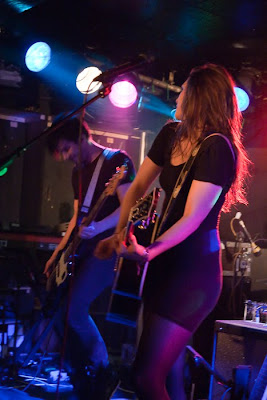 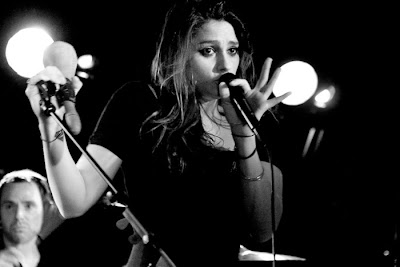 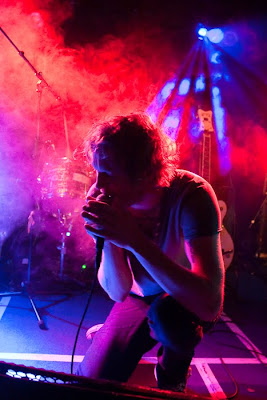 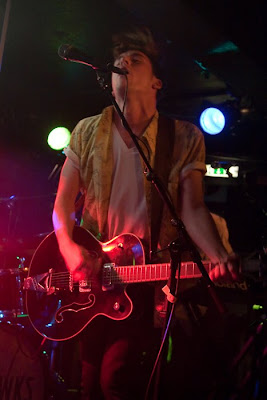 This youthful band reminded me of a cross between mods and American 70s rock bands such as Springsteen, and shades of U2. They play with fiery abandon with a rich vibrant sound.

Tiffany Page is vibrant and sassy - and she plays her guitar with a sexy swagger and sings with a husky edgy voice. She has several catching tunes - my favourite being '7 Years Too Late'. Her voice has been compared to the tomboy edge of a new Chrissie Hydnes (of Pretenders fame 'Brass in Pocket'). Her band are strong and energetic too. She is signed to Mercury Records, and has a single "Walk Away Slow" and expected album "On Your Head."

Detroit Social Club are an indie rock band from . Their front man commands the King Tuts stage with the fun soul of a young Joe Cocker. Their music has a punk dance vibe, and 80s feel and they are entertaining to watch. They have been tipped to achieve national success by several British music magazines, notably NME. They are signed to Fiction Records. 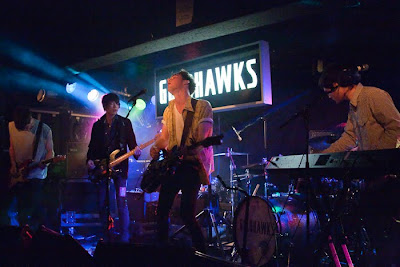 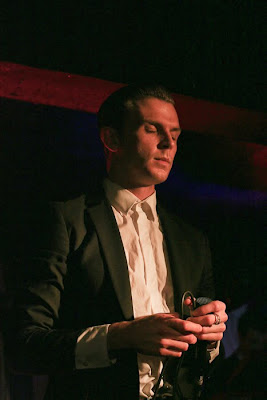 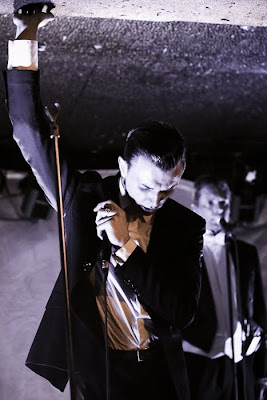 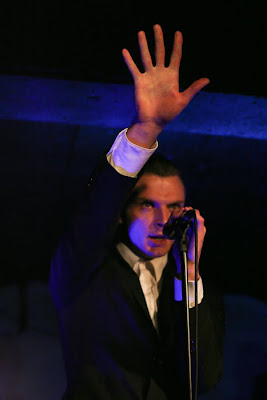 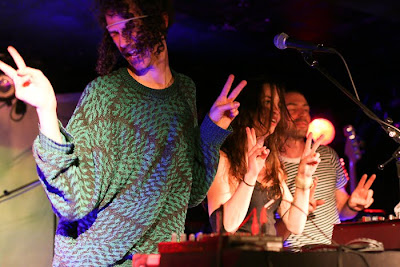 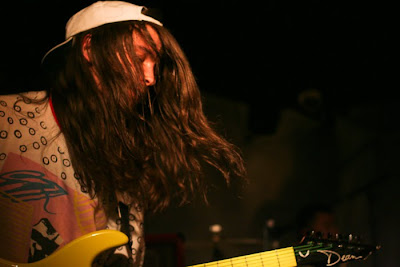 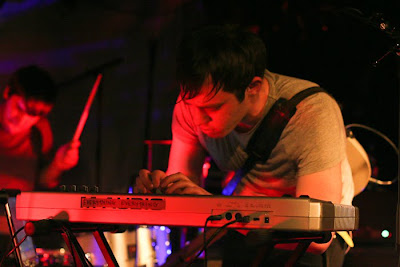 Three very different bands! - from dancing upbeat, to charged rock and lastly stylised 80s rock.
First on stage was the very likable Darwin Deez from New York, and he and his dancers were a lot of fun. They literally bounced on stage and then performed the first of several slick dance routines, and very fit they are too! Darwin seemed to smile his way through his set, and he made eye contact often - and at the end of the set he said,'oh you like us!' They were also set up to focus on the edges and middle of the audience and in so doing kept us with them. I got some energetic fun shots of them. After I noticed them mixing and chatting with the audience which I thought lent a good touch and only adding to their popularity - rather than any 'aloofness'. Darwin's music was in the Conor Obrest style. I also spotted Darwin dancing at the front with his very long arms waving loosely during Everything Everything's set!
Next up were 'Everything Everything' - a rock band in red lights. There was a positive energy from this fresh rock band, while their lead singer has a strong voice with the elastic range and punch of a younger Tom Yorke. They had a good crowd of supporters there who seemed to enjoy their set. I was handed their set list so here it is - Intro, Suffragette, Schoolin, Qwerty, Engine Room, Tin, Photoshop, MY KZ, Weights.
We then waited patiently as the stage was set up for the last act another Manchester band called Hurts. Their set had a white backdrop with lights facing the audience - and this was in stark contrast to the reds of Everything Everything with their charged rock music. Hurts were named in a BBC poll of one to watch in 2010. I met Adam earlier when he came out to the bar area, and I said how much I liked their songs that I'd heard on YouTube - and he looked very smart in a red waistcoat. He said he had played at King Tuts before - with their previous band Daggers maybe?

Hurts are a duo with Theo the lead singer and Adam their keyboard player. 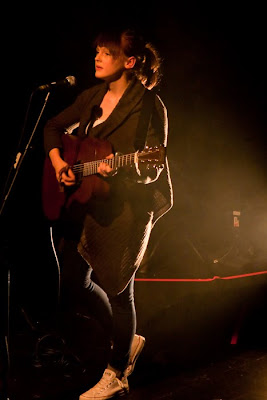 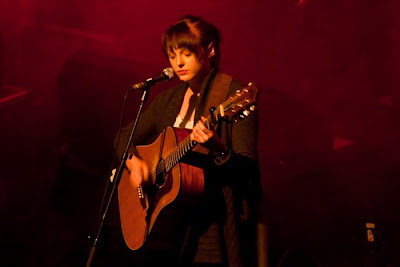 She seems so young - and she is! She has a soft, clear focus and grip on reality - if mainly through books, her upbringing and her father. She sings a Neil Young song 'Damage Done' taught to her by her father. She speaks of her father's view in Hampshire where she grew up and his wanting to be taken there one last time.
Her new folk songs are of old stories and of , with something peaceful and dreamlike in her voice. She has a sweet sensitivity, and her eyes are gently expressive. Laura crosses her ankles as if rocking softly on her toes and on her melodies that weave and spin gentle spells. Her lyrics tell of sparkled stories that catch the breath of winds and deep forests. You sense she has read a lot. She stands a bit shyly centre stage with her guitar, and yet while Laura looks demure she starts with her strong and charged single ' Devil Spoke.' She follows with songs from her new album - 'Goodbye England' 'Made By Maid' and 'What he Wrote' - with the lyrics 'He wrote, I'm broke, please send for me, But I'm broken too, and spoken for, do not tempt me.' She also takes the tempo up with songs such as 'Darkness Descends.'
In the City Hall foyer they are selling very classy and artistic Laura merchandise - T shirts and posters.
Read more » 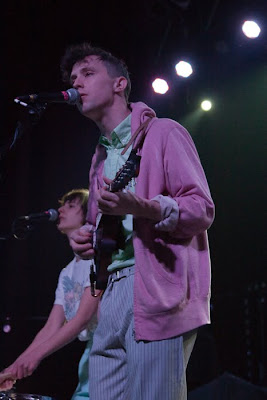 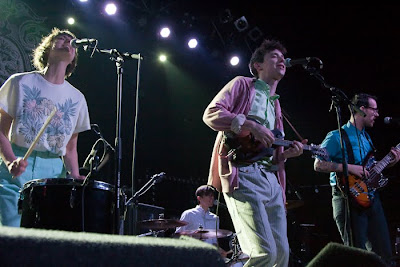 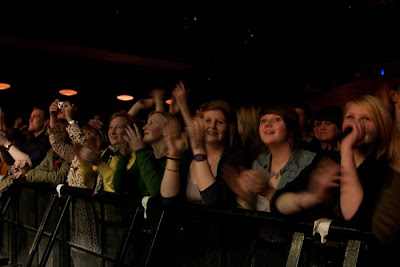 Fanfarolo who suported Mumford - top band. Also a pic here of the audience during Mumford.