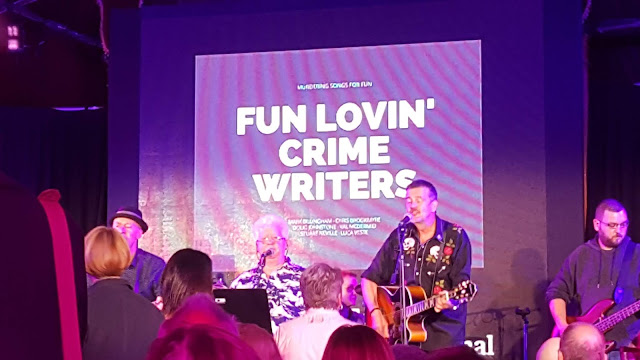 So I was fortunate to catch the Fun Lovin Crime Writersat the EIBf Unbound this August! – and Val surprised with her strong vocals. What a fun night!!

*On BBC Radio Six Music Val McDermid did the Paperback Song Choice September 4th. McDermid is one of the most highly respected Scottish crime writers.

Val spoke of singing and folk clubs when she was younger, and of of trying the open guitar tuning used by Joni. She chose the song For the Roses, because it was about fame, and what fame does to people. And how we must not loose sight of where we come from. She spoke of writing to music without lyrics and of how much music means for her.
and of the story inside the songs.

Her final song choice was the Proclaimers song, Letter to America, when Val spoke of her pride in Scotland history – and the sadness over the large Diaspora and of all those who left to make the life they wanted. She hopes that now our country offers a better future and a place they can make the lives they want..