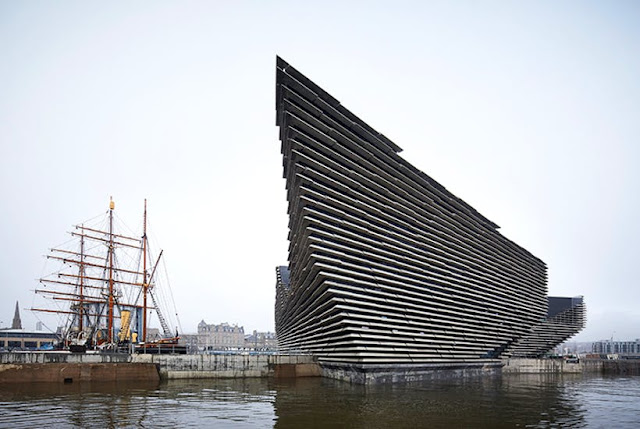 In Dundee city of discovery
Japanese architect Kengo Kuma has designed a dramatic sculpted building that looks like the hull of a ship, and he says, the cliffs on Scotland’s east coast. The outside is hard but inside there is a softer feel. – and by contrast there is a huge flow of light and dramatic views over the Tay river and bridge. Kuma studied Mackintosh as part of his training and has clearly been influenced by Mackintosh clean lines, simplicity, and subtle use of light and drama.

Dundee suffered in the 60s from post industrial decline, and in the middle ages was second only to Edinburgh as a great trading port. When the Tay bridge was build, sadly Dundee lost its water front and harbour.  So now we have this wonderful project to regenerate the Tay waterfront. It is long past time we had a museum dedicated to Scottish design on this kind of scale. It’s a great boost to see Dundee’s water front given this impressive revamp.

Dundee Thoughts.
The openness and long light of the flowing Tay river. The vibrant , honest colour (he paints with words) of the incomparable Michael Marra’s songs – from ‘Hermelss’ to ‘Freda Kohl at the Tay Bridge Bar’– as he mixed his hometown with his American influences. Marra is so much about the story of Dundee, I was sad he wasn’t alive to see this night but his daughter Alice Marra and her choir were the first to sing a song in the new V & A – Dignity.  One of the best gigs I’ve been to was the first time I heard Michael play on the grand piano at Mugdock theatre for his intimate gig – when he finished with the Bards song Ca the Yowes.
Some other incredible musicians from Dundee – Deacon Blue, Danny Wilson. 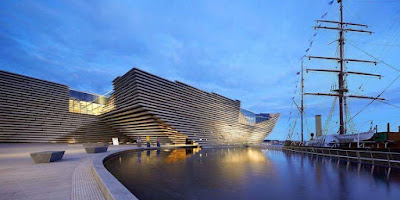 The centre piece of the new V & A design centre is the Rennie MacIntosh’s Oak room, which was fortunately put into storage and has now been lovingly restored and sings like a piece of artistic music. (there are 700 pieces and 3 different light fittings.)

The new V & A hosts over 300 objects - the oldest exhibit is a 15thcentury manuscript and the newest a computer APP. There are three main design sections: The Story of Scottish design, Design and the imagination
The media and press were given a first look this month, when travel writer Simon Calder compared the building to the Guggenheim in Germany but he says it is better, with an enthralling story of Scottish design.

Mike Galloway director of development. Dundee council has been instrumental in this regeneration of 8 km stretch along river to reconnect city to the Tay river.

Dundonians now believe they can do it!

Green Issues?
Does the museum address any “greener” issues – someone suggests why not use jute (as it used to be) instead of wrapping all our food in awful plastic that will never decompose. Strawberries used to come in cardboard punnets