EIBF 2017 Building Bridges and Tearing them Down:
Divisions and Collaborations and Borders

The sun is shining the first days at EIBF and Chris Patten, the former Governor of Hong Kong, is being interviewed by stv on the lawn. The Scotsman is being sold along with freebies at the entrance (although the Scotsman is now the Scottish Daily Mail and not the paper it was back in the 70s) and we are ready to hear, meet and greet the famous and new emerging writing talent.

Another year to celebrate the written and spoken word in the perfect setting of Charlotte square Edinburgh. EIBF is a celebration of books, written words ideas, spaces to collaborate and exchange views, inspiring stories. retrieving and renewing. There were debates this year on how to build on the nature of “civic” nationalism, with collaboration and with looking outward to common interests, shared values, an informed country, and to renew Scottish arts.
**EIBF 2017! I want to praise the many open-minded cultured, lateral thinking, travelling journey men and women – the writers in Scotland today – who value the journey; try to comprehend the new; the young as well as the past; the historic streets as well as the complex internet. They are looking for ‘open spaces’ to discuss new worlds, adaptability, progress, to build bridges and for accountability.

There are many great Scottish thinkers, writers, doers, of the past to follow on from - George Buchanan, Thomas Muir, David Hume, Allan Ramsay, Robert Burns, James Clark Maxwell, Carnegie, Walter Scott. As well as the Edinburgh enlightenment figures of David Hume, Frances Hutcheson, Adam Smith and Adam Fergusson. For centuries Scotland had kept close and political links to Europe part of the community of European scholars – Diderot, Goethe, Montesquieu and Voltaire. In Scotland the most literate nation in Europe in 1750 - in the 18th century Edinburgh was a leading light in the Enlightenment. Change can be good or bad, but always necessary. 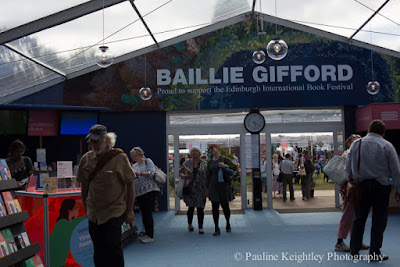 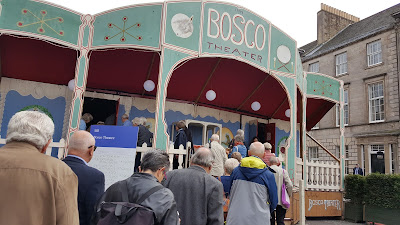 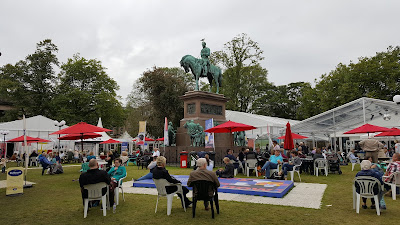 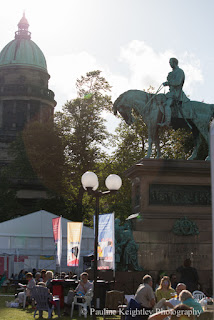 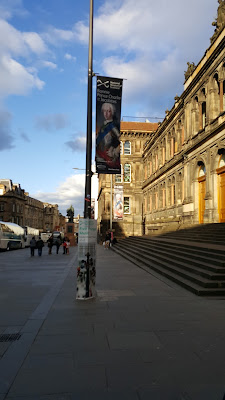 We live in such strange times”
The first article I read was Andrew O’Hagan on his journey to Yes. Wonderful piece.
O’Hagan gave an inspired talk “on his journey from no to yes, of his being at the count and driving home after to Ayrshire and his feeling that the future Scotland had changed that day. He had been to sit in on the court rulings over May’s attempt to use the 'Royal prerogative' to railroad in the Article 50 for the UK to leave Europe, without any consultation with Westminster. He was horrified at the slamming of Scotland’s interests.

Irish Day!  Thursday was Irish day and how polite they were too! I dashed up after too to see the performers on the high street and attended a few shows
I always enjoy a couple of nights at the free Unbound shows – and this proved a quality, fun night.

(1)  *Framing the Arts’ - statesmen of Scottish Arts - Professor of Scottish literature Alan Riach, painter Sandy Moffat, and musician and composer, John Purser
How we might build a more positive future for Scotland and of the general ignorance of Scots of their arts and heritage. They discussed Arts at the heart of life in Scotland and the cultural history of literature, painting, and music. Raich had a 2 page spread in the National newspaper, that day on the artist Margaret Hunter that day. They spoke of the cultural divisions and battlegrounds and they spoke of knowing what was in their own house, as well as looking outwards. Book, ‘Arts and the Nation, ‘
*Gerry Hassan and Michael Keating (professor of Politics Aberdeen) Hassan mentioned that London’s’ shadow was only similar to Moscow in Russia and the dysfunctionality of the UK. Books ‘Scotland the Bold, A Nation Changed?

(3) ‘Visions for a Future Scotland’ - with singer songwriter Karine Polwart, Thomas McEachan, from the Youth Parliament), Chris Van Der Kuyh of the Dundee Games industry. They discussed Voltaire’s quote “We look to Scotland” –and whether Scotland still has this clout today? They all spoke of what we value most about people – respect, compassion, warmth. Also that Adam Smith did not only write of economics, he also wrote, Theory of Moral Statements of Human Empathy’. Smith also fought against slavery.

***Maybe there is no right or wrong, yes or no, and as the song claims ‘About building Bridges' or 'Fifty Tones of Grey', (my son’s successful a Capella group!). How do we build those bridges?
A little shot of stardust perhaps – My first thought is it’s not the politicians who have all the answers and their positions are too entrenched. We need bridges, conversations and more diverse voices, more than ever. A theme running though the EIBF this year was the need to bring different voices together and for physical platforms through the Arts.

Its been 250 years since Burns wrote his epic ‘A Mans a Man’. He wrote of equality – which he learnt from ministers and great philosophical writers in the Declaration of Arbroath Scotland and its charter for democratic principles, taken on by American and French struggles late 18th century. The great thinkers saw the hoped for ‘that all men and women are equal’ – perhaps it’s the journey that is harder to understand. How do we get there?

I worry, even hundreds of years after these great thinkers (and all the great thinkers today) – nothing much has changed. Scotland may believe in equality, freedom, education and fairness for all citizens, but we are still a land of great divisions.
*At EIBF there were questions over the concept of "Nationalism". Scottish nationalism is not about race, or religion, its about all who live here. At EIBF politician Chris Patten and Turkish writer Elif Shafak, questioned that N can ever be a force for good – the opposite is that globalization is not always the right answer either. Edinburgh is very much an international and European city. In the Arts it is crucial to understand your own heritage and also to look outwards. Scotland’s self-rule is firstly about democracy and secondly the importance of being both national and international and modelled on small countries in a bigger trading block, such as Norway. They misunderstand, SN is the opposite - and not a narrow or nasty 'blood and soil' nationalism - SN has always been inclusive, open, diverse, outward looking and welcoming and about how do we build bridges.

(All photos are copyright of the author, for any Licence for use online or in print media, please contact on my Facebook, thanks)