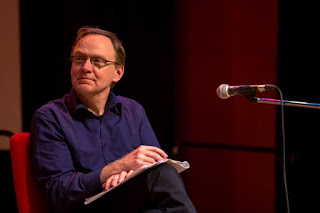 Gerry Hassan and Michael Keating (Professor of politics Aberdeen) - 'THE EVOLUTION OF DEVOLUTION'
They discussed debates on how to build bridges, with many questions over frictionless borders and if this is possible to preserve communities. They felt that there was too much noise and not enough silence or consideration. Hassan criticised the SNP timidity in government, and claimed that there are no leading thinkers who identify with social democracy and its values are not nurtured. I wasn't sure I understood this comment because I read many informed and educated journalists in both the Herald and National newspapers who believe in social democracy.

They asked, how can we nurture non-party spaces? A future Scotland cannot be about certainty, or the conditional politics of independence or unionism. How do we move on from the entrenched divides, and that we require more 'open mindedness'. The voices of middle Scotland have many 'close-minded warriors' who don't want to have a debate between independence or union. There are important questions over what kind of self government is required for our economic and social project? How to find a shared destination and how do we get there?

They said there was an absence of a think tank not made up of political parties, for a new national project. They spoke of the evolution of Scottish devolution and that London’s shadow over the UK (with 40% of the UKs GDP) was similar only to Moscow’s over Russia. Other issues raised included - taxes for a fairer Scotland.; welfare powers; childcare are ways of tackling poverty; and social inclusion.

The Westminster parliament was an empty vessel and they spoke of the hope for more self-government within an EU framework. Bulgaria has a huge amount of power and socially more equal than Scotland. Is there a contradiction between social growth and equality? Smaller countries are often more socially equal.
The constitutional questions have several levels – the nature of the state and federalism and devolution as positive forces.
The Smith commission was a political compromise. Political society asks the right questions – but the parties don’t listen - they only fight and not hearing the bigger issues. There has not been enough post mortem since Indy Ref, too much silence.

Then there was the 'British nationalism' and the talk of borderlands, such as by Rory Stewart. – perhaps we only disagree on the framework? Borders are both entrances and exit and there is the innovation of open borders and frictionless borders. They wondered about the peace process in Northern Ireland and the border there. National is both good and bad.  However Brexit has thrown all of this out of the water.

The hope to address what kind of society are we going to look like? There was far too much short termism and they felt that politics was too emotional. Politicians not offering more self government and in fact it is far from certain what they are offering? How is independence formulated are and not what people want – the question are more about the kind of self government. They felt that many have not understood what Independence means or the degree of sovereignty.
Then there is the decline in unionist Scotland – society and power changing with catalysts for further change. Political parties in pockets of money. The economy is unbalanced and the economic model is not working and the banks have not been reformed. The redistribution of money is only slightly more under Labour, Corbyn offers managed capitalism with fixed exchange rate.

They argued for opening up politics and not having professional politicians and for Scotland cultural change and a second revolution. Civic Scotland is engaged in this debate. There was no discussion over the lack of any Scottish media. Is Scotland going to stay in Europe? The SNP have to change with the times and with the rate of change they suggested. What is the differences between Devo Max and independence  anyway – the difference is miniscule.