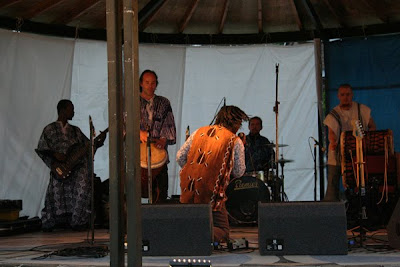 Diwan bounced onto the bandstand in colourful African outfits and lifted the looming clouds with African  sunshine and dancing rhythms.
Sene is a charismatic front man backed by a dynamic band. The band played with both a wild, infectious vitality and chaotic beats, both loose and ragged, that resulted in both a laid back and upbeat mood. It was music that came from every angle. They play West African music of soft jazz, swaying bass rhythms and gentle percussion beats with a wide assortment of percussion instruments from Africa, one called the ‘djembe’ drum.
Samba enjoyed every minute, he smiled often and rarely stopped dancing. Catch them if you can!
As Samba commented – ‘Even the midges were dancing!’
Sene was born in Senega and moved to Scotland seven years ago. He writes his own material and sings in French, English and his native Wolof. His style is strongly influenced by the jazzy grooves of Senegal with grooves and beats to get you dancing.
I met their bass player, Kamli N’goni from Wassonlon Southern Mali earlier, when he and their American percussionist were dancing to Partick Beats drums in the courtyard. I asked him about their music and he told me their music was ‘Afro jazz grooves.’

Music is Mali’s most famous export. The level of musicianship is extraordinary – there is even a traditional musicians class known as griots. Throughout Africa, music holds this incredible power; in a place where life hard, it is one of the greatest joys. Mali and Senegal are the two leading places to go for West African music - there is the hypnotic ‘dessert blues’ of the north and the ‘danceable rhythms’ of the south. In the 70s Mali’s government, like others in Africa, funded larger bands to express the culture and vitality of the new nations. For example the ‘Super Rail Band, that mixes Afro-Cuban dance rhythms with the traditional. This is a land of no media, and no Internet, where music can travel by cassette. Mali is a Muslim democracy and while poor is also tolerant, diverse, optimistic and stable. In Mali swords have turned into guitars and music helps to express a feeling of national unity. The arrival of the electric guitar gave young men a new voice. There is a music festival in the dessert, at an Oasis called ‘Essakane’. This is a three day event, where many travel across the Sahara by camel for weeks to attend.