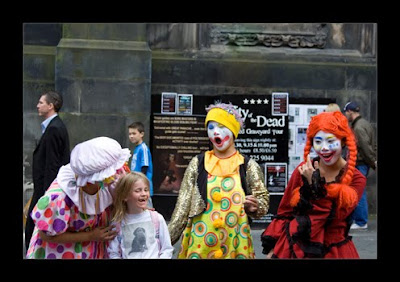 Ah how does it feel – another year has passed – and the EIF is here again. I have put in my order for warm sunny days. On a dull Tuesday I ventured rather late in the day up the High Street and I met John Kielty, writer, actor, musician, leaning in the St Giles doorway. John is now shuttling between and the past year. The Martians performed their cover songs and the designer and the producer of their musical the Sundowe are there. John's lyrics in a show at the Underbelly are nominated for a Lyric Fringe award. The good news is that John is doing one of his ghost tours on Thursday evening. The Martians are so much fun!


‘INTERPOL’ gig at the Corn Exchange with Macabee supporting who were also good, although they kept us waiting an hour rudely. Very hot, sweaty venue with light coloured walls ( used to be a slaughter house!) They were powerfully dynamic and full of energy with strong harmonies and interweaving rhythms, recommend them.
The sun’s here! and the Martians busking on the High Street. This is the weather I expect for my festival visits, it makes all the difference. I went to the Andy Warhol exhibition at the mound.

I took the Ghost tour to Greyfriars Bobby’s graveyard and the Covenanters Grave where there are many buried and you can feel the passage of time. The spooky dark graveyard has inspired many writers including John and he quoted from his Sundowe musical which was about the dead rising in . In this dark eerie place you can feel their very presence and their lost voices.

Friday - I went to see the play - A History of Scotland in 60 Minutes. It was highly entertaining.
I spent time at the Book Festival, which is quiet after the High Street madness. Later we took one of the rickshaws down to the Traverse theatre behind the castle! Fribo gig at the Acoustic Centre who are an innovative mix of Norwegian and Scottish traditions.

Saturday - I went to the C venue where students do their shows and I saw Out of the Blue, which was an  entertaining show.  I had lunch in the café and enjoyed the young costumed artists having fun with their shows.  I read of an Irish fiddle player who did his show ‘Around the World on 80 quid’ with no advance PR or venue. Travelling the world he got involved with drugs and ended up on a beach with no violin and thought to himself, what’s the point? Then he decided he could play anything at hand.  He played a few sold out shows in and people said to him – ‘Why not play the Edinburgh Festival?’
While there are many fun things such as the Speigel tent and more, a festival needs to evolve and has been going since the 40s! More streets available for new musicians to perform – say blocked of streets near with a central place to buy their cds – similar to ’s Blues and Jazz festival. The sun casts late rays across the High Street blinding anyone walking towards the castle. Playing any festival is a buzz, there’s that exaggerated feel to it all and the heightened senses - the odd street performers and people of every nation brought together in a melting pot- from Australian scouts to north Indians. Here’s hoping for sun and fun shows next year. See you there 2008!  THE  SUNDOWE musical plays in Nov 2007 - before touring.