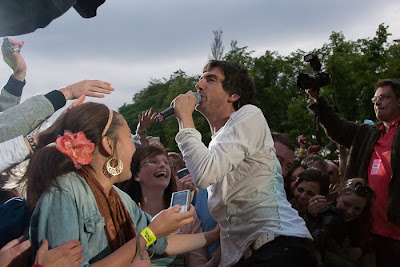 No One does melodic rock pop better - this is a band reaching their top form.

I first saw Snowpatrol at T in the Fringe Edinburgh 2006. Their album 'Eyes Open' had just been released then, and it is often better once a band has had time to tour the songs from an album and to get a feel for which songs work best with the audience. They have so many top quality songs that people simply love to sing. Gary Lightbody really worked the crowd this time - and he kept the photographers on their toes running after him! There is something closely emotional about Lightbody's voice and love songs - they brim full of charisma, yearning and hopes... and float on the warm breeze.