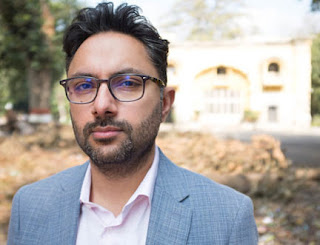 He writes for the Economist newspaper. 15K copies of his new book have been bought for England’s schools. He said that even those students with history degrees have no knowledge of Empire. Sanghera spoke of the malicious forgetting and how the patterns keep repeating. At the extremes there is the nostalgic views  or the critical view of Empire.

There is so much ignorance. For instance many in Home office had no idea of the Windrush generation and their British citizenship. This is truly shocking.

The British Empire lasted over 500 years so hard to study – from Henry VIII to the hand over to Hong Kong 1997- compared to the world wars, which lasted a mere 4 years. The empire was haphazard, complicated and motives changed.

The British created the Sikhs. Highlanders and Sikhs fought together and went over the lines first!  Some Regiments of Indians who died in the wars were not even named.

The cycles keep repeating and the prejudice against the ‘other’ – say Irish, with their strange religion, not integrating,… From Jew to Irish to Muslim.

We can be both proud British and questioning of our history. The UK may soon be 40% ethnic. How do we break the pattern? Proud and ashamed.

Routes into reconciliation. Brown vs White. In America there is at least a level of conversation and the Scottish curriculum is more enlightened. While Echo chambers take us nowhere.

Positives of Empire? Multiculturalism and British people travel like no other. Brexit? – from colonizer to rule-takers. A great free trading nation, tied up with empire. Indian princes were sent to British schools.

We need truth. There is a culture war and fake history. Empire is still pushing colonialism – the City of London sits outside the real needs of the nation to finance the Empire of business and insurance.

Tell your truth. There is an emotional side to the slave trade – try to understand it and look at facts. The Commonwealth approves everything Britain did and it is no longer relevant.