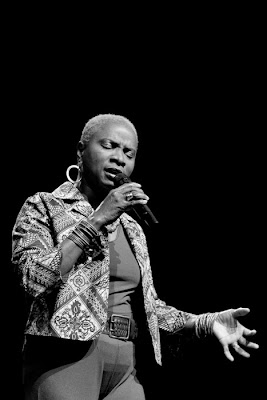 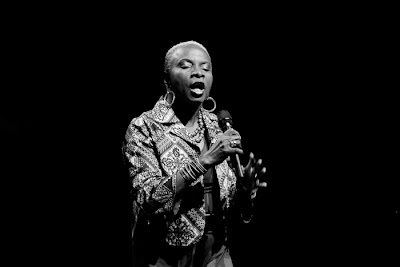 Angélique Kidjo had the Old Fruitmarket dancing on Friday night. Kidjo and her band brought rhythmic delights and the vibrancy of Africa's sun- with songs such as 'Hush Now Child,' several rumba's, and afropop dance tunes. She also sang the song La Petit Fleur with simply bass accompanying her heart-stirring voice. She is known for her wide-ranging musical influences - she mentioned James Brown, Steve Wonder, Santana and Otis Redding. Her musical influences include the Afropop, Caribbean, rumba, jazz, gospel and Latin.

Kidjo is a grammy award winning Beninoise singer-songwriter. She studied at a Jazz school in Paris and she has recorded four albums for Island Records and in 2000 she was signed by Columbia Records. She has been a UNICEF Goodwill Ambassador since 2002. She has also recorded songs for movies, Tv and documentaries.

Later during the concert Kidjo danced through the packed audience, and it was surprising to note how tiny she was, as on stage she has a big presence. She then invited around15 audience members up to dance behind her on stage, and along to her drummer's exciting dance beats. An exhilarating and upbeat gig.