Neil Young and his band Crazy Horse rocked the SECC 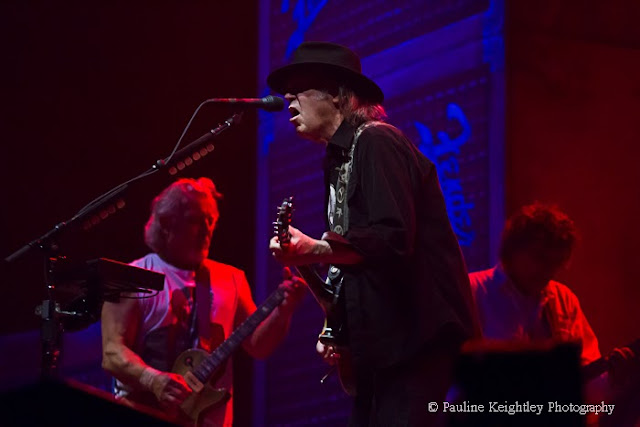 His father was a writer and he told Neil – ‘Write every day, you never know what will come out.’
Young is a kicks ass, no holes barred, tells it like it is singer songwriter. He has travelled along many long highways, sometimes in vintage cars, and he remembers which car he was driving to record each of his albums. Neil left Canada in his early twenties to find that LA sound. He had already met Steven Stills.

The opening salvo for the SECC concert was full of colour and drama and set a scene that forecast a quality concert; when men in white coats assembled the stage with very large speakers and a solo microphone and finished with pipers playing Flower of Scotland. Young enjoys staging and film and for each of his tours chooses a theatrical scene.
From the start Young, guitarist Frank ‘Poncho’ Sampedro and bassist Billy Talbot were hunched together in a communal heavy guitar rock. The Crazy Horse players sound is strongly guitar based and they performed some overly long tracks on this Alchemy Tour. 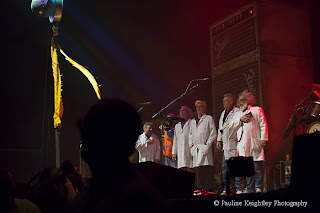 Young performed new material such as ‘Walk Like a Giant’ from his latest album Psychedelic Pill - which was 20 minutes long and was played like a storm cloud full of charged disturbed energy, along with the added drama of special effects and the song finished with a releasing rain. .
Well received songs were Cinnamon Girl (1969) and long time favourite Heart of Gold, when Young took to the stage with only an acoustic guitar. This went down particularly well with the large SECC audience but was really the first opportunity to sing along or to relive memories. Then he sang a sensitive version of Dylan’s Blowin in the Wind. Young enjoys older instruments of character and he took to a honky tonk piano to sing his lovely new song Singer Without A Song. After this too short interlude it was back to the Crazy Horse rock. The band closed the set with the thunderous guitars of ‘Hey Hey My My’. 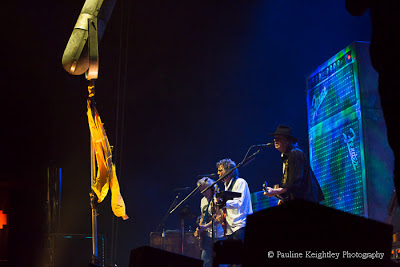 There was a lot of synergy and energy in the bands playing. I read that when Neil was playing guitar with his band Buffalo Springfield, a reviewer noted his guitar playing had a special charge and flow to it. He took this to heart with his future music and live playing. 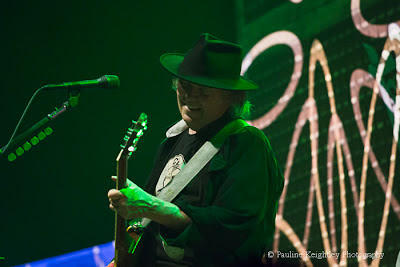 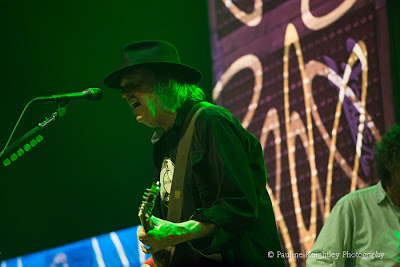 American icon Young has a distinctive tenor voice and his back catalogue of songs includes some of the most memorable songs from the early 70s. I was disappointed not to hear After the Gold Rush and Helpless. For me it is always about the song. When Young has an array of songs to choose from, I’m not sure I understand the one token classic. I guess it depends what we expect of our musicals heroes.
Set List: Love and Only Love, Powderfinger, Walk Like a Giant, Ramada Inn, Hole in the Sky, Heart of Gold, Blowin In the Wind, Singer Without a Song, Mr Soul, Cinnamon Girl, Everybody Knows This is Nowhere, Fuckin Up, Hey Hey my My.

It is good he is still rocking in the free world, and I understand Neil wants to keep things fresh and moving on, but concerts by other living legend veterans of the 70s have their back catalogue of songs as the back bone of the gig, with newer material interspersed over them. Some of the band’s material was limited and repetitive. Sorry Neil! 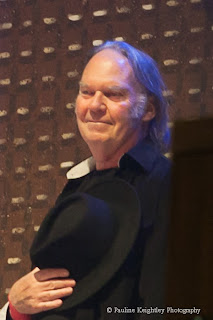 Young on his band Crazy Horse – “We want to show our audience who we are. It is a very special thing we have, the way we play off of one another, the real deal. But it all comes from the songs, the images in our minds and hearts, the lyrics and the way they resonate. That is the fuel in the band. That is what will make the music relevant.”
Some of his best loved songs – Heart of Gold, Helpless, After the Goldrush, Living in the Free World, Old Man.

I have recently been reading Neil Young’s autobiography Waging Heavy Peace which is a great read and he is an engaging and colourful character.
Some Quotes – ‘In my life I've had various health threats, polio, seizures, a brain aneurism. None of these things has really changed me much, although it is hard to say for sure. These are vents that are part of my life, they make me who I am. I am thankful for them. They are scary.’

‘It is lonely job out there performing. I like it when the sound is right and the audience is into it and the music is relevant. If one of those elements is missing you are screwed. You are killing yourself slowly.  You need all three elements.’ 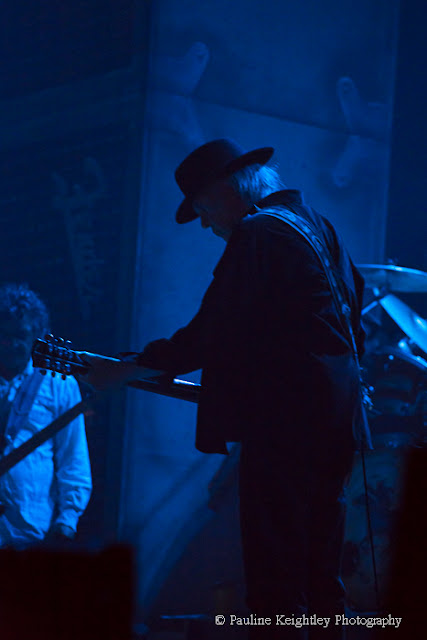 Young is known for his clawhammer acoustic guitar playing and for music that is sometimes ragged and sometimes melodic.  Best known for folk and country rock and electric hard rock with his band Crazy Horse.  Young is an outspoken advocate for environmental issues and the welfare of small farmers, having co-founded Farm Aid in 1985.


*I was excited for taking photos at the gig – but these days many American artists are severely limiting access for the photographers. The concert was being filmed also but not with cameras on a moving track. We were limited to the side of the pit behind a red line. On top of this Neil’s face was half shaded with his hat and surprisingly the light was poor quality too. A concern for photography is that filming is taking over and stills are being used yet how creative is the filming. If I look at the best quality photography they far outshine grab stills.