I've had some meaningful photo experiences this year. Shooting at EIBF(Edinburgh International Book festival)) was so interesting of course. I went to several challenging talks - most notably by the pre-eminent Scottish historian Tom Devine - on the Scottish Enlightenment and secondly on the Darien Project. I attended talks also on the Scottish referendum questions and the press and media. EIBF BLOGS September 2014 here.

-Scottish Referendum. I view Scottish Independence as a journey. Many of the top Scottish intellectuals and writers (such as Tom Devine and others) have come out on the side of Scottish independence believing it to be the best way forward for Scotland, after careful  consideration.  As yet I've not found any good reasons for the UK union- apart from past sentiment or the world wars. This pulling and sharing of resources quoted by the Better Together team seems to mean London pulling in the UK resources. The referendum energised Scottish politics and since then the SNP have had such a surge in new members that no one could have predicted, and they are now the third largest UK party.

-Recently I had the exciting and fun experiences of shooting at the wonderful Your Disco Needs You - The Musical at Glasgow's Mitchell theatre - written by Anita Neilson, musical score by David Allan and choreography by Tim Noble. 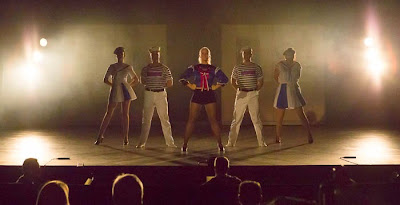 -Photography.
I didn't set out thinking I would be a music photographer - I became one by accident after capturing interesting images at a music gig.  It seemed to matter to me to capture something special about unique gigs.
I know my best images are mostly captured when there is unlimited access to a concert and I can find a nice position to the side of the stage and not interfere too greatly with the audiences enjoyment. I want to be a bystander, an observer, not a participant - although the whole point for me is  to be lost and absorbed by the music. That's why I am there - at the Queens hall Edinburgh or the Oran Mor Glasgow.

I attend gigs I hope to enjoy. Of course for the bigger artists there is the photographers pit, sometimes OK, but other times a rammy to get those good shots in the restricted three song grab, which means most music photos end up all looking the same kind of limited mug shots at the safe start of the gig and creativity is lost. While with a few other serious gigs there can be an exciting adrenalin rush, all great fun!  I'm very grateful for all the interesting musicians, artists, and writers I have met.

Renowned jazz photographer David Redfern died 2014.  In his obituary to Redfern by his close friend Tom Seymour -
http://www.bjp-online.com/2014/10/david-redfern-photographer-obituary/
"Like other photographers of his generation, schooled as he was in the chemistry and craft of picture-making, he has lived through the digital revolution. Gone now is the widespread recognition of the photographer as a respected artist providing a valuable contribution to the development of the industry. In its place is a new paradigm of control and restrictions: access restricted to the first three songs or the back of the hall, draconian contracts, impatient minders. As he wrote in 2005: “Nowadays one has to cut through so much hype and crap before one can even consider whether to photograph an event or concert.” It is indeed sobering to consider how many images we might not be able to enjoy if today’s restrictions had applied when David Redfern was building his archive."  Well exactly!
I began to wonder is music photography about the art and craft or simply the mug shot?
I continue to work on editing techniques, mostly using Lightroom (occasionally Photoshop for trickier editing) and what works and what doesn't. Its a very subtle thing.

-Writing Work. My other focus of my writing work progresses with my first book nearly finished (?) especially as I have three other new books in progress now!  The organising, sorting and finishing work takes far longer than the first writing drafts by miles. As is the case with photography also - the shooting is only about 5% of the work.