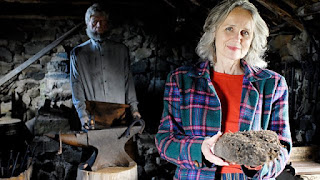 Her background is Glasgow, Irish and on her mothers side from Skye and the Stewarts. Her father was a piper.
When she was young she was ill with polio and during that time heard stories from her grandfather.

She went over to Newfoundland Canada with her father and discovered all these old Scottish traditions that had died out in Skye and in Scotland. She had trained as a primary teacher but now decided to become a folklorist and she has been teaching at the school of Scottish studies at Edinburgh university. There she worked with the Scottish poet Hamish Henderson who was always asking her to poetry readings.

Her talented son Martyn Bennett went with her everywhere and heard as a child all these traditional singers and pipers. He had an excellent teacher at school and when he was doing his higher music students were allowed to play the Spanish guitar but NOT the Scottish pipes!  So he sat his higher music playing the pipes, one of the first to do so.

Martyn sadly died at the young age of 32. I was at the wonderful opening concert at Celtic Connections 2014 which was the first orchestration of Martyn's incredible Grit album - one of the best concerts I have been at. I wondered where he got all these references for his music as if he'd pluck them out of the air - now I know it was from his mother. She said in a recent radio interview that she tries to be thankful every day for the small gifts.  Things that rankle - let them go.
Martyn Bennett was influential in the evolution of modern Celtic fusion, a blending of traditional Celtic and modern music.