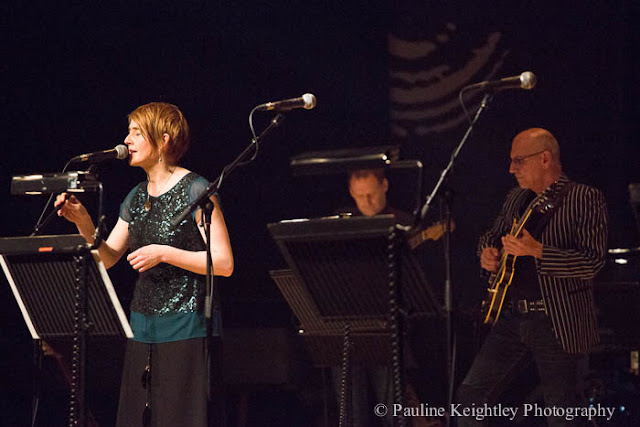 "touching souls and surely you touched mine..."

I felt enriched - this was a perfect evening of nostalgia for the many massive Joni fans there in the packed audience concert hall to hear Joni Michell's Hejira album - now set to new Scottish words by the author James Robertson.  Joni wrote this album while driving solo from Miami to LA ,on both the freedom and loneliness of the road. 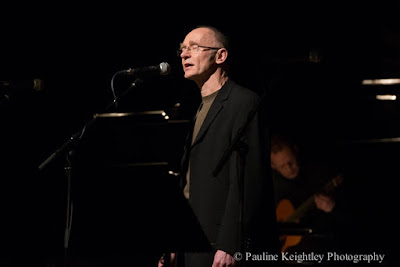 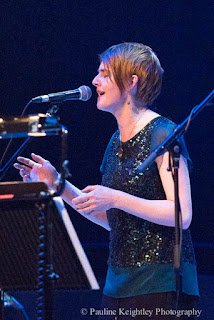 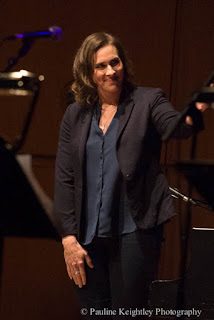 *The first SET was the Scots Re-imagining of Hejira

Author James Robertson began the night. He said after travelling in America, seeing Joni live and buying the album, Hejira was now "in his bones" - so this was an instinctive project for him to re-imagine her words into the Scots language.  He had already written the first Scots adaptation twenty years ago and was encouraged by Celtic's director Donald Shaw's wish to bring more spoken word into the festival.

Scottish folk singer and musician, Karine Polwart and her brother guitarist Steven Polwart, were central to organising this concert.  Karine, herself a talented singer song writer gave careful performance with her expressive vocal.
She sang four of the tracks - Tod(Coyote), Hoolet(Black Crow), The Find(Hejira) and Columba(Amelia) when she was thrilled to be joined onstage by the renowned Grammy winning guitarist Larry Carlton, who has worked with many of the greats in music - including Joni's Hejira. 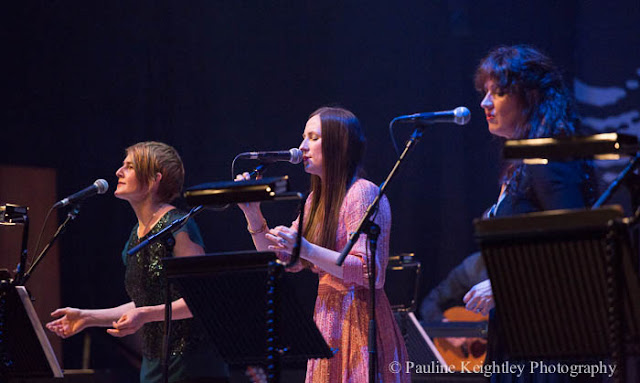 *The second SET was some favoured Joni songs.
Olivia Chaney interpreted well two of Joni's best loved classics on piano A Case of You, Women of Heart and Mind.
Gaelic singer Julie Fowlis sang in English Cactus Tree and River with strings and expressed well the vulnerability and poignancy of her voice.
Award-winning singer Kathryn Joseph, performed the songs Rainy Night House and the classic Both Sides Now with her delicate timing and ethereal voice. Canadian singer Rose Cousins, challenged herself well to sing Joni's haunting Blue.

With all the talented female line up on stage they then performed the more hopeful and embracing songs The Fiddle and the Drum, followed by Free Man In Paris - and after a standing ovation a lovely encore of  the Circle Game.  All five women performers clearly showed their awe, love and respect for how much Mitchell has influenced their own songs and music. 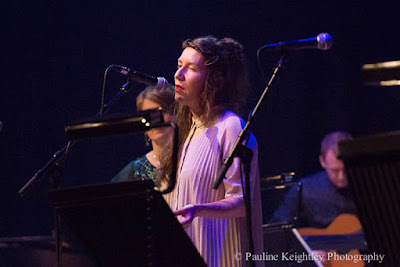 This was a night of delightful harmony and memories - both the joy and the pain of those journeys.  With a great expanse of subtle light and shade and movement in the music.  For this album Joni blended her folk, rock and jazz influences. Well done to the entire cast for such an memorable evening of song!

Joni was one of the first to write lyrics to her songs in such an intimate way. She is a great lyricist and painter of profound images. The direct simplicity of her words are highly memorable with lines such as  - ' You impress me most when you don't even try.' As she sings on Blue Motel Room: "I’ve got road maps from two dozen states, I’ve got coast to coast just to contemplate …"

James asked us to send a Big Wave of thanks over the ocean to Joni - one of the greatest singer songwriters of all time. I agree wholeheartedly with him - still as brilliant 40 years later! 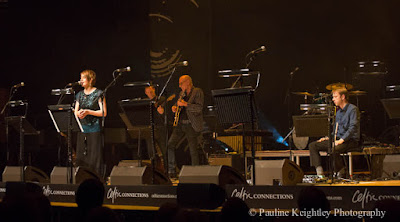 Robertson has also adapted other books into the Scots language.  He spoke in an interview for the Herald of the challenges of working on this creative project to bring his words into the musical contact of the songs -  You can’t simply swap a song from one language into another and expect it to work. It’s no accident that Scots is the "natural" language of much traditional Scottish music, and American the "natural" language of blues and rock ’n’ roll. This does not mean, however, that synthesis is impossible or undesirable. On the contrary, building bridges between musical and wider cultural worlds is exactly what Celtic Connections does. '


That wis the lang, hot simmer, Joni,
we thocht it wid niver end;
I had ma haill life oot afore me,
nae mair lessons tae attend.
Caurs tailed back in the Safari Park,
puggies laughin in the trees:
the warld wis turnin inside oot,
shrinkin by invisible degrees.
…
I gaed through twenty-nine states and then some mair –
forests, mountains, fields and feelins.
I walked ma shoon tae shreds on stoury roads,
sometimes hurtin, sometimes healin.
Awthin turns in time tae legend,
and in ilka legend somethin’s true;
that fit-sair, luve-seik pilgrimer
aye walks aside me noo.