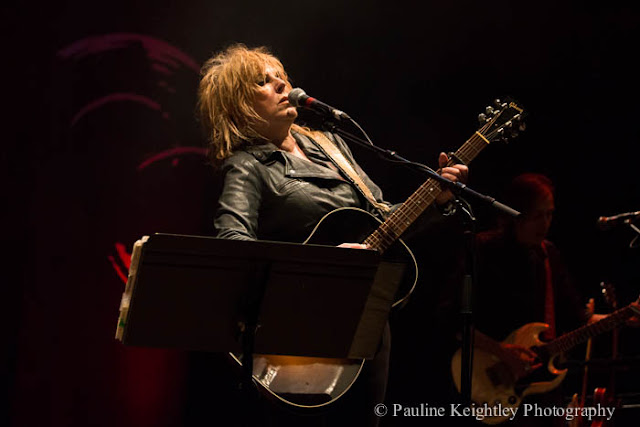 Sassy straight talking rock on lady! This lady takes no prisoners and she seems grounded.

I came new to Lucinda, while I had read good reviews of her work. Looking at her Wikipedia page I noticed that at 62 she has unusually been having more success as she gets older.
As we waited in the packed Glasgow concert hall an enthusiastic man appeared at the side of the stage waving a set list. I got a photo - was this Mr Overby her manger and now husband? I wondered was the extra time before the gig to ground us to be ready to listen?

She sang several tracks from her new 2016 album, Ghost of Highway 20, in which she sings of her memories of the deep south and of those lost to her. 'Places you can't let go of - they won't let go of you' and 'I found myself on Highway 20'
On any given night there would likely be certain songs on her set list such as Drunken Angel, Lake Charles and Cold Day in Hell. 'Each time I look at the world there's a different story.' Another song was entitle Protection. 'Protection from the enemy of love, the enemy of rock n roll' And on Find My Joy she sang, 'You took my joy don't mess with me.' 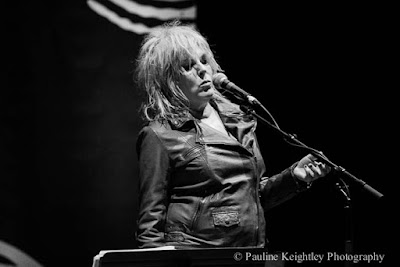 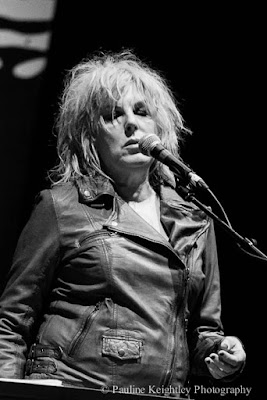 Her father was the poet, Miller Williams (who read at Bill Clinton's inauguration). He once took her to hear the preacher and street singer guitarist Blind Pearly Brown. She may have found setting his words to music a challenge but she managed on his poem Compassion and on Dust. 'You couldn't cry if you wanted to.' Her mother, Lucy Morgan was a musician.

The rocking high quality band Buick 6 performed with her. Guitarist Stuart Mathis took up mournful and joyous melodies along side dynamic drummer Butch Norton in his white cowboy hat and their bassist David Sutton racked up the energy. Often she turned her back to conduct the band so they are all in sync. Lucinda with her shock of blond hair and leather jacket is not your average softly dressed country gal! On a couple of songs there was just Lucinda on guitar.

For her encore songs Lucinda sang Robert Johnston's Stop Breaking Down Blues and JJ Cale's song Magnolia. She smiled as she searched for the last song among her pages of songs when her roadie came to assist. 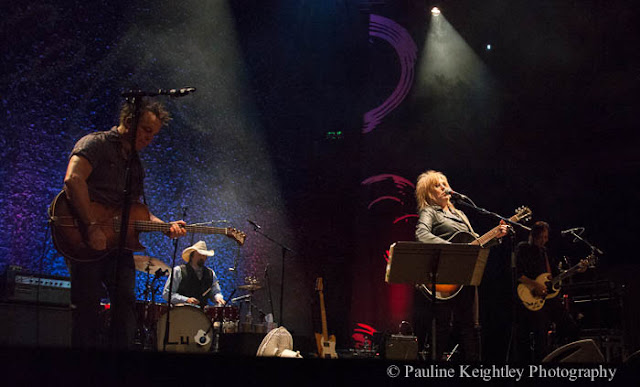 Her spiritual songs cover pathos, regret, searching. Lucinda's voice packs a punch with a rasp, unforgettable direct earthiness. At times with her head titled back slightly her voice soars and meanders those blues songs.

She is a three times Grammy award winner and considered one of America's top songwriters. I can understand why, I was new to these songs and they registered and struck home right away.
Harmony, peaceful, rocking!

She is a defiant lady who has travelled many roads. There were loads of stand outs and textured, layered songs with an artist of this calibre and there is nothing subtle about Lucinda. http://lucindawilliams.com/ 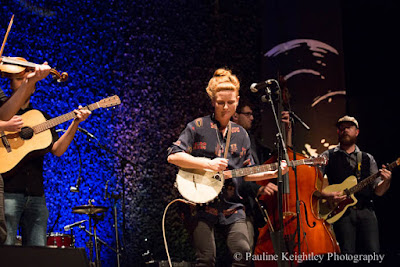