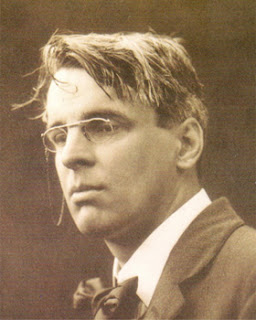 POETRY – is the window to our souls, the hidden beauty, the longed for memory, the secret truths, the way nature sings…. Poetry is connected to music, rhythm images and changing seasons…

William B Yeats is widely considered to be one of the greatest poets of the 20th century. He belonged to the Protestant, Anglo-Irish minority that had controlled the economic, political, social, and cultural life of Ireland since at least the end of the 17th century. Most members of this minority considered themselves English people who happened to have been born in Ireland, but Yeats was staunch in affirming his Irish nationality.

Although he lived in London for 14 years of his childhood (and kept a permanent home there during the first half of his adult life), Yeats maintained his cultural roots, featuring Irish legends and heroes in many of his poems and plays.
The poet was staying in England at the time of the Rising, and learnt of developments in sketchy news reports, and in letters from his friends and family. Yeats and his family were horrified.
It was left to the poet to conjure up the phrases that summed up the events, and the mixed feelings felt by the public towards the rebels, who had seized the GPO. As he put it himself, all had "changed, changed utterly".  Revolutionaries, who were initially heaped with opprobrium by a significant section of the populace, were turned into heroes.
Yeats wrote his poem 'Easter 1916' in the months after the rebellion, but he waited for four years to publish it in the magazine The New Statesman. He predicted that the rebels would take their place in history:
I write it out in a verse -
MacDonagh and MacBride
And Connolly and Pearse
Now and in time to be,
Wherever green is worn,
Are changed, changed utterly: (YB Yeats)
*And I write of Robbie Burns
Who wrote of our being at one with nature, and of being created equal..
Then let us pray that come it may,
(As come it will for a' that,)
That Sense and Worth, o'er a' the earth,
Shall bear the gree, an' a' that.
For a' that, an' a' that,
It's comin yet for a' that
That man to man, the world o'er,
Shall brithers be for a' that.