*George Harrison, his Songs Brought the Sun and the Stars 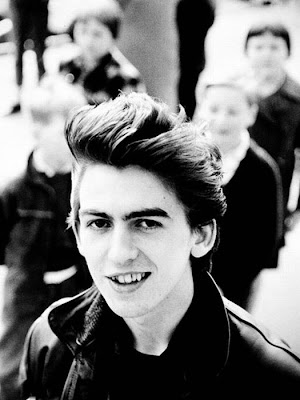 ‘Sense never gratified/ Only swelling like a tide/ That could drown me in the material world.’
' George didn’t see black and white, up and down as different things. He didn’t compartmentalize his moods or his life. People think he was this or that or really extreme, But these extremes are all within one circle.’ Olivia Harrison

Harrison, the often overlooked Beatle, wrote some of the most loved Beatles songs - 'Something', 'All Things Must Pass' and 'Here Comes the Sun'. His guitar playing was highly expressive and admired by other guitarists. He added more to the Beatles sound than many realized. And my guitar gently weeps.....
I’ve been curious about Harrison since my twenties when this rhythm guitarist to my surprise said he was the most talented of the Beatles. After all it was always Paul and John in the spotlight. I watched Scorsese’s documentary ‘Living in the Material World’ recently and I enjoyed the way he is able to get under the skin of artists that he portrays, as he did in his  documentary on Bob Dylan entitled 'No Direction Home'.
From the start George was the little brother, brought in by John and Paul to play the guitar riffs. He didn’t enjoy the teen worship and out of control screaming hoards of girls swooning for the band, and after a bit it became over whelming to him.
However anyone who studies the Beatles back catalogue will discover that some of their best songs were written by Harrison. He gave the Beatles a ‘lyrical’ style of playing. He is listed at number 11 in Rolling Stone magazine's list of "100 Greatest Guitarist of All Time". He drew from the records of Carl Perkins, Duanne Eddy, Chat Atkins, Buddy Holly and Eddie Cochran. There was his prominent rhythm guitar on 1966 Taxman, Love You Too on Revolver; This Is Love, When We Was Fab on Cloud Nine. Eventually Harrison developed his own skills and he submitted his songs for Let It Be and Abbey Road albums – songs such as All Things Must Pass. Then he wrote one of the best love songs ever written ‘Something’ which was Harrison's first Beatles single (a double A side with Come Together). 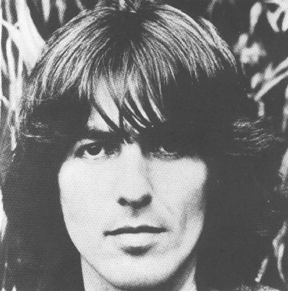 George the Innovator.  He was an innovator, an observer who was endlessly curious.  He was a free agent and he didn’t like the rules yet he was also very much a team player.
Concert for Bangladesh(1971) – Held at Madison Square this was the first large scale concert by pop musicians to support a charity and led to Geldof's Live Aid. Even today sales of the CD raise money for UNICEF.
George the Mystic. His spiritual journey meant everything. He had money at an early age yet there was still something missing for him.  He married blond model Patti Boyd after filming Hard Days Night and she led him to an interest in Eastern philosophies.  Indian sitar player Ravi Shankar  became his mentor and he believed you needed to have direct experience of god in whatever form to believe. ‘ Look we’re not these bodies lets not get hung up on that.’  Patti inspired two of the greatest love songs ever written - Something by Harrison and Layla by Eric Clapton.  She later married Clapton and Harrison married Mexican Olivia Arias. 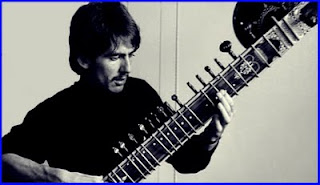 Post Beatles. All Things must Pass is considered to be the best post Beatles solo record with songs such as – Isn’t It a Pity, Beware of Darkness, My Sweet Lord, I’d Have You Anytime (co-written with Dylan) and the Dylan cover If Not for You.
George The Filmmaker. Handmade Films. He paid the largest price ever for a movie ticket when he had his house mortgaged to fund Monty Python’s The Life of Brian.
The Traveling Wilburys (1988). When recording for his album Cloud Nine Harrison so enjoyed  working with Roy Orbison, Bob Dylan, Jeff Lyne and Tom Petty(no less!) that he later got them together to tour and record as a super group. 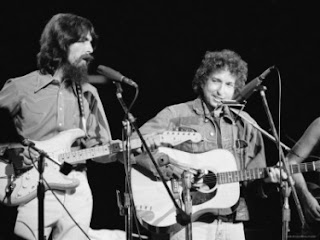 Songs. I Gave My Heart To You, If I Needed Someone, All Things Must Pass, Something, Here Comes the Sun, My Guitar Gently Weeps, Isn’t It A Pity, Within You Without You, What Is Life,


Harrison had a compassionate, spiritual and caring voice that seemed to come from a deep sense of belief and certainly of love. His friend Eric Clapton told of them sitting in the garden at Friar Park one morning when the sun started to come out and suddenly inspired the song .. like a miracle..The Beatles were different they were the first big band of the early 60s and those years 1963 to 1966 transformed the musical landscape forever.
‘Create and preserve the image of your choice.’ 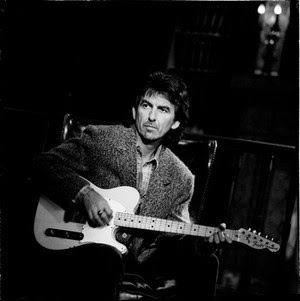 All Things Must Pass, Concert for Bangladesh, Living in the Material World, Handmade Films, Cloud Nine, Travelling Willburys.
It has been a joy reading about Harrison for this blog and listening to his music.