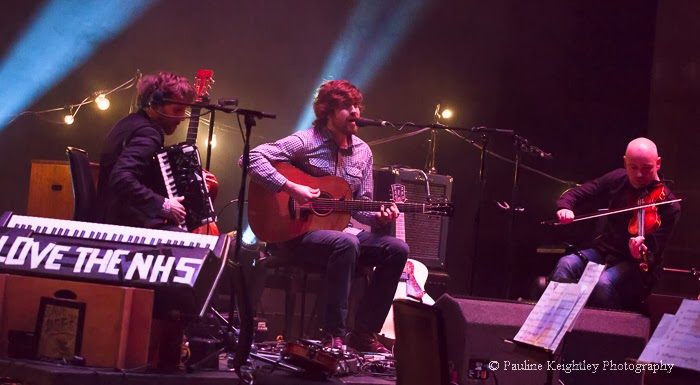 The stage at the City Halls was set with a line of glowing lights and the sign on Martin Green's keyboards, which was set on it's side, proclaimed 'I Love The NHS'. Lau of course is an Orcadian word that means 'natural light.'

Lau are an award-winning folk band who have been gaining attention last year for their music of traditional folk voices and traditional folk song themes mixed with contemporary influences. They played on the BBCs Jools Holland show in 2012. The band are - respected singer songwriter and guitarist Kris Drever, acclaimed fiddler Aidan O’Rourke and an innovative accordionist Martin Green. 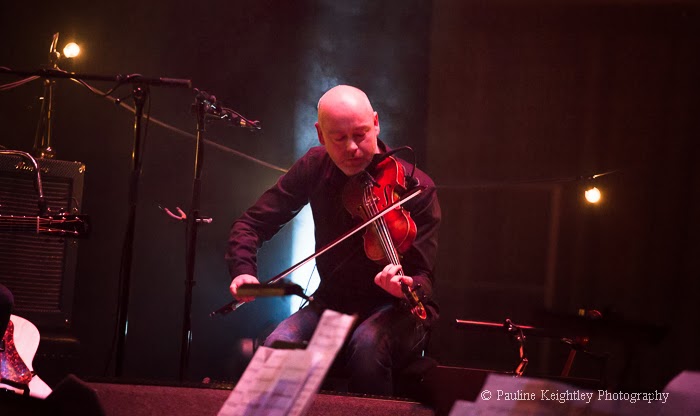 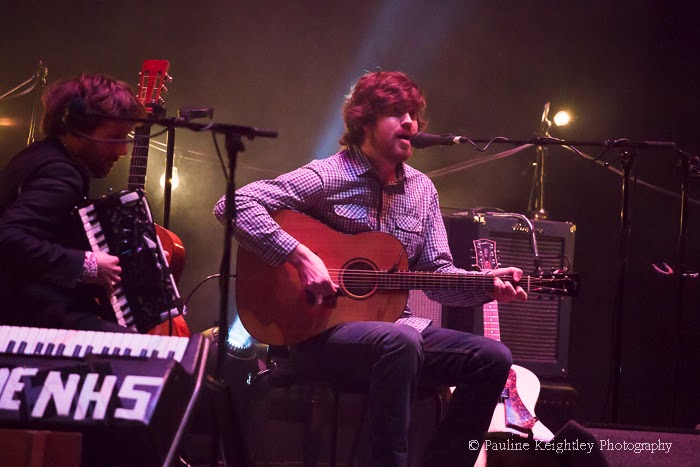 They played mostly instrumental tunes and also some songs. Kris sang with his warm voice the songs Ghost and Midnight Feast.  Martin said their Ghost EP was about social migration and documented how we are stronger through our diversity.

During the concert tonight Lau played one of the first performances for the UK's first New Music Biennial as part of Glasgow 2014 Events - 'The Bell That Never Rang.'
The piece was commissioned by Celtic Connections and PRSF and composed and performed along with the contemporary experimental strings of the Elysian Quartet.  The music was carried through with Drever’s subtle guitar, while the layering textures and challenge of Lau’s traditional folk sound worked perfectly with the classical musicians.

Kris often leans forward on his guitar and they pull their energies together. Aidan is a powerful fiddler who moves a lot as he plays. While Martin experiments with varied soundscapes, and on one tune he played the soothing sounds of the sea


Lau are an experimental outfit and also work on Lau-land mini festivals and on other collaborations and they are taking folk in new directions and crossing boundaries with their music.
Quote Aidan O'Rourke on Lau's website - the band's music makes excursions into jazz, world, Gaelic and classical music and fiddling to the fore of another magnificent supergroup, Kan. “We’re folk musicians but firstly we’re musicians with a love of different styles and we don’t think we’re cheating on anybody by drawing on that. We all love and play a wide range of music but what we have in common is a deep love of hardcore traditional music.” 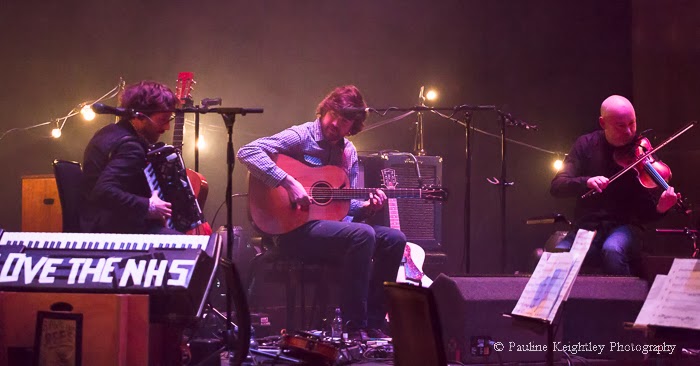 They were well supported by Canadian Annabelle Chvostek, who was previously with the Wailin Jennys. She had a silky soft-toned voice and played country folk tunes with echoing violin and electric bass.

I saw several other faces from the Scottish music scene at the concert, such as Louis Abbot of Admiral Fallow (Lau supported his band at the Queens Hall Edinburgh last year).
The event was preceded at the City Halls by the press launch for the UK's first New Music Biennial as part of Glasgow 2014 Events. (funded by PRSF for music)

New Music Biennial
There was a press launch at the Glasgow City Halls 30th January for the Premiere of 'The Bell That Never Rang' by Lau w/ Elysian Quartet.

The event was funded by PRSF For Music for the UK's first New Music Biennial as part of the Glasgow 2014 program.  It consists of 20 pieces of music from composers and performers across the UK which have been inspired by an international collaboration of idea.

All the new pieces will be performed at two showcases over one weekend - one at London's Southbank Centre (4-6 July) and Glasgow Concert Halls (1-2 August). These performances will also be available to listen to on BBC Radio 3.
Aims - To explore the connections between audiences and artist and to take art to new places and new audiences.
The projects are also about how people view Scotland - how people see us, what we value.