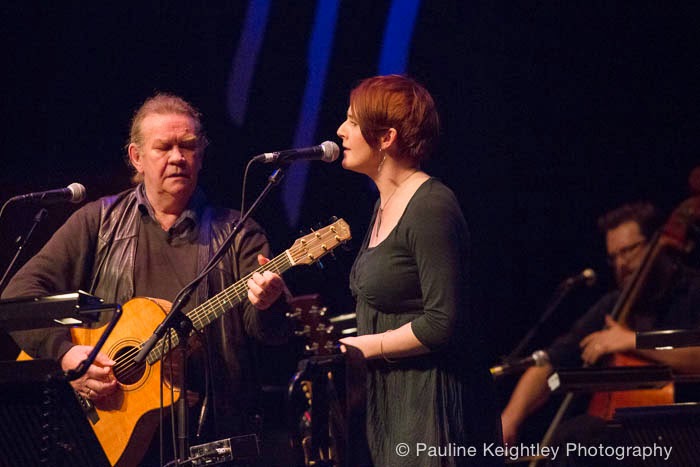 One of the special moments at Celtic Connections is when some of our top musicians collaborate together. At ‘Blood and Roses: Concert for the Songs of Ewan MacColl’ at Celtic Connections 2015  we were treated to two of my favourite Scottish folk artists and top Scottish folk musicians  -  folk legend Dick Gaughan and Karine Polwart, who began the concert with a strong interpretation of Ewan's song Ballad of Accounting.

Gaughan also sang a dramtic Father’s Song, whil Karine sang a truy felt interpretation of MacColl’s song Nobody Knew She was There.

I first heard many years back in Edinburgh and was taken on with the power of his very individual guitar playing and the moving expression and strength of his voice. He sings questioining songs of social commentary with a poignant honesty. Karine was moved when she first heard his album, A Handful of Earth.
I first heard Karine perform at an initmate wonderful gig at The Tall Ship Glasgow where I enjoyed her memorable htoughtful songs and subtle insightful voice. She has a lovely quality to her voice.

Karine has a warm, sincere personality and a huge smile! Polwart is a Scottish singer song writer. She writes and performs music with a strong folk and roots feel.  She has been recognised for her solo career, winning three awards at the BBC Folk Awards in 2005, and was previously a member of Malinky and Battlefield