The Ties That Bind exhibition A new Photography exhibition The Ties That Bind by four of Scotland’s most acclaimed photographers is now at the Scottish Portrait galleries – Colin McPherson, Jeremy Sutton-Hibbert, Sophie Gerrard and Stephen McLaren. They pointed their lenses over those defining, energised days of the Scottish Independence Referendum. When for the first time Scotland questioned and had rich grassroots debates on notions around identity, culture and what democracy and the union means today.

In the 90s English Scottish Arts director Timothy Clifford, planned to close the Scottish Portrait galleries! There were protests and the galleries had a 17m refurbishment in 2011. Thankfully. I visited the galleries then and I thought it needed more of a contemporary Scottish artists feel to it.  How wonderful then to see now in 2015 an exhibit by four of Scotland's top photographers. I have met both Jeremy and Colin at Edinburgh book festival photo shoots - and I send them my warmest congratulations!.

Document Scotland, formed in 2012, is a collective of four internationally acclaimed photographers dedicated to chronicling the social, cultural and economic life in Scotland. These images create a compelling dialogue about Scotland, its people, diversity and culture, and reveal the nuances that shape a nation’s identity.
Legacy — Scotland’s role in the slave trade and sugar plantations of Jamaica in the 18th century;
Tradition — the centuries-old celebration of Border towns in the Common Ridings festivals;
Engagement — the devotion and commitment from football supporters in small towns and communities across the country;
The Land — focusing on contemporary farming through the experiences of six women.
* Since the vote the establishment and others wish us all to move on now and accept British values - whatever they are exactly?  Has Scotland a unique voice and if so how best can we be governed?

*Journalist and editor Kevin McKenna writes glowingly the exhibition  -  "Since the birth of democracy in these isles, Scotland has never been granted the opportunity to take stock of itself as a nation: what she stands for; where she came from; in which direction she is choosing to travel......"  "They describe communities and convey flavours of a Scotland that many of us either do not know, have forgotten about or would rather ignore. Here, alongside the unravelling of Scotland’s enthusiastic participation in the Jamaican slave economy, we also find images of the Borders Common Ridings and the unchanged ways of a community not very far from most of us but a planet away from our experience.  There are stark and beautiful portrayals of three women who live among the ancient grass and stones of Scotland’s wild places and fashion a subsistence in them. Closest to my heart are the pictures of a fondly remembered and greatly admired former colleague, Colin McPherson, who has conveyed the relentless faithfulness and love of working people for their community football clubs at a time when corporatism, greed and unearned riches mock such seemingly empty and redundant values. To understand these values, these people and the communities in which they yet prosper is to come to a fuller understanding of Scotland. "
"The campaign for independence gave us a chance to pause and reflect on what Scotland means. Few of us took that opportunity but these four artists did. What they captured was more timeless and authentic than perhaps even independence itself." 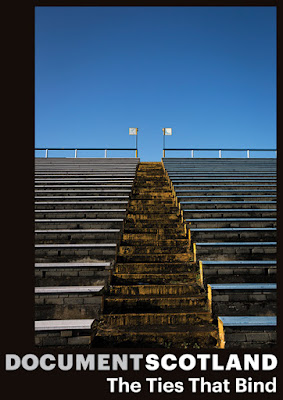 'When Saturday Comes' by Colin McPherson. The title is from the magazine which has commissioned him over the last 10 years to cover all aspects of football culture both in Scotland and further afield. Colin has explored the game at all levels from international fixtures and the Champions League to non-League and grassroots football. His photos concentrate on lower-league football and look at the rituals, sense of belonging and the commitment shown by supporters, players and those charged with running the clubs from Berwick Rangers to Fraserburgh.

'Unsullied and Untarnished' by Jeremy Sutton-Hibbert focused on the Scottish Borders area and its traditional summer festivals, known as the Common Ridings.  He visited various sites, including Hawick, Selkirk and Jedburgh  made portraits of the riders and other attendees in traditional outfits. The history and sense of community is kept alive, and explored traditions and their legacy to modern society.

'A Sweet Forgetting', Stephen McLaren’s project, revolves around the involvement of Scots in the sugar economy of Jamaica in the 18th and 19th centuries.  McLaren spent a month in Jamaica looking for the sites of plantations owned by seven Scotsmen, before coming back to Scotland.
McLaren’s photographs largely concentrate on the mansions and estates purchased with money from the slave trade. Stephen has been a freelance photographer, writer, and curator since 2005. Before then he was a television producer and director working on documentaries for several UK channels. He is Scottish but now lives in San Francisco.

'Drawn to the Land' by Sophie Gerrard.  Her exploration of the contemporary Scottish landscape. Gerrard’s photographs offer a glimpse into the lives of six women farmers in Argyll, Perthshire, the Scottish Borders and the Isle of Mull, and how they shape, and are shaped by, their landscapes.  Women farming increasing by almost 25% in the last 10 years. Through each of these women’s compelling stories, “Drawn to the Land” presents an emotional response to its rugged mountains and remote lochs and islands and a wider story of Scotland’s national identity.

Kevin McKenna: Scotland has found its voice ... the No camp can't put this genie back in the bottle
Another quality article by one of Scotland's top writers Kevin McKenna on a new Photography exhibition The Ties That Bind. QUOTE - " Healey it was who, in an interview with Mandy Rhodes, editor of Holyrood Magazine, laughed at how the British Labour Party had acquiesced with Margaret Thatcher and her Tories in concealing from Scots the true extent of the oil and gas revenues that had been taken from the North Sea.
“I think we did underplay the value of the oil to the country because of the threat of nationalism but that was mainly down to Thatcher,” he said. “We didn’t actually see the rewards from oil in my period in office because we were investing in the infrastructure rather than getting the returns and really, Thatcher wouldn’t have been able to carry out any of her policies  that additional five per cent on GDP from oil. Incredible good luck she had from that.”
http://www.thenational.scot/comment/kevin-mckenna-scotland-has-found-its-voice-the-no-camp-cant-put-this-genie-back-in-the-bottle.8345