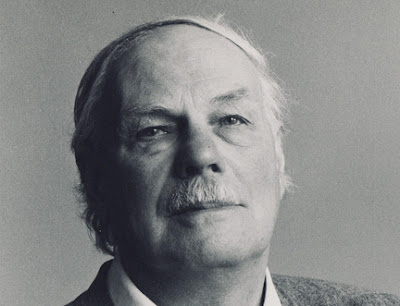 Hamish Henderson
Like Burns before him, he looked to the traditions of the Gaelic and Scots ballads, and he gave expression to a nations heart.

Spring quickens.
In the Shee Water I'm fishing.
High on Whaup's mountain time heaps stone on stone.
The speech and silence of Christ's world is Gaelic,
And youth on age, the tree climbs from the bone.

A piper played in Henderson’s well kent and loved song Freedom Come All Ye,and we all sang along, The event was part of Edinburgh International book festival 2019,
Tonight was a tribute concert for Scotland’s great poet and song collector Hamish Henderson.
On the centenary of his birth, poets have come together to celebrate his rebellious spirit and influence with a unique poem anthology. – THE DARG

Poet, translator, Highland folklorist, Henderson was part of the Scottish folk revival and a co-founder of the Edinburgh university’s Scottish studies. He was a campaigner for the Scottish parliament and guiding light behind the Edinburgh fringe festival.


I first saw photos of Hamish at the Old Fruitmarket venue Glasgow. I heard of his song, Freedom Come all Ye. That he had been a frequent visitor at Sandy Bells bar, Forrest road; a collector of Scots song and a co-founder of Scottish studies at Edinburgh university. I was also a frequent visitor at Sandy Bells back in the 80s, before I moved abroad.

He became a folklorist and collector of Scots Bothy ballads and Gaelic song, to keep Scots voices alive. He spent years tracking down storytellers and folk singers with the American folklorist Alan Lomax. Together they recorded hours of traditional ballads, Gaelic work songs, children’s songs and contemporary folk songs from all over Scotland. His ambition was to record a people’s history before it has disappeared. To preserve the tales told around the campfires, tinker storytellers and songs of the singer Jeanie Robertson. .

Our Oral Histories. Author, critic and broadcaster Stuart Cosgrove, (writing in the Sunday National 15.09.19 ) wondered, who will record the significant oral history of our vital Scots independence movement today?Who is there to collat our energetic indy movement – of all those who gave up so much of their time and energy to work tirelessly. All those how “gave up their jobs, rode Yes bikes, stuffed envelopes, designed flyers and pounded the streets.”

He writes of the importance of such histories - “Oral histories require many volunteers, researchers and recorders willing to travel extensively… “Oral history is a collection of historical information using interviews with ordinary people who have unique perspectives on important events, first hand evidence of the past which captures people’s experiences and opinions often in ways that contrast with or contradict official history.”  It is “history from the bottom up, told by onlookers, joiners, unemployed – not through the eyes of the powerful. “

**Scotland present desire for our self-determination and independence has deep, creative and authentic roots because of visionaries such as Hamish Henderson.

**Hamish Scott Henderson (1919 – 2002)grew up in a cottage in the Spittal of Glenshee. And like Burns his mother was s singer of Gaelic songs. He was also a soldier in the Second world war: He studied Modern Languages at Cambridge. In the years leading up to the war, as a visiting student in Germany, he ran messages for a Quaker organization aiding the Germans resistance and helping to rescue Jews. Later he moved to Edinburgh and frequented the folk bar Sandy bells. 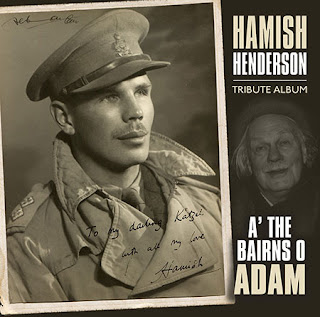 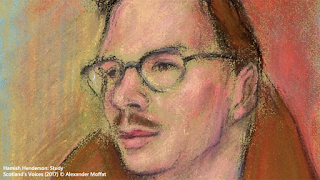 **Biographer Timothy Neat  wrote in the Guardian March 2002, “Like Burns, Henderson was, first and last, a poet, and poetry was for them both language rising into song, responsible to moment, people, place and joy.”
“The tryst of Hamish Henderson, who has died aged 82, was with Scotland. It was a meeting of high consequence - across the 20th century, in darkness and in sun, Scotland informed all that Henderson was as a man and a poet. “
“Not for Henderson Auden's conceit that poetry never made anything happen; he believed that "poetry becomes people" and changes nations, that poetry elevates and gives expression to the deepest and best being of mankind, that poetry is a measure that extends far beyond the written word, that poetry is pleasure and a call to arms.” Timothy Neat

As he states in his prologue to the Elegies:
Let my words knit what now we lack
The demon and the heritage
And fancy strapped to logic's rock.
A chastened wantonness, a bit
That sets on song a discipline,
A sensuous austerity.

Freedom Come All Ye
Roch the wind in the clear day’s dawin
Blaws the cloods heelster-gowdie ow’r the bay,
But there’s mair nor a roch wind blawin
Through the great glen o’ the warld the day.
It’s a thocht that will gar oor rottans
– A’ they rogues that gang gallus, fresh and gay –
Tak the road, and seek ither loanins
For their ill ploys, tae sport and play
Nae mair will the bonnie callants
Mairch tae war when oor braggarts crousely craw,
Nor wee weans frae pit-heid and clachan
Mourn the ships sailin’ doon the Broomielaw.
Broken faimlies in lands we’ve herriet,
Will curse Scotland the Brave nae mair, nae mair;
Black and white, ane til ither mairriet,
Mak the vile barracks o’ their maisters bare.
So come all ye at hame wi’ Freedom,
Never heed whit the hoodies croak for doom.
In your hoose a’ the bairns o’ Adam
Can find breid, barley-bree and painted room.
When MacLean meets wi’s freens in Springburn
A’ the roses and geans will turn tae bloom,
And a black boy frae yont Nyanga
Dings the fell gallows o’ the burghers doon.