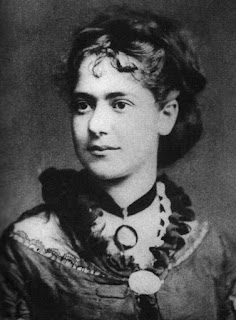 The Daughter of Karl Marx (the father of communism), Eleanor tutored leaders of the workers movement. Her greatest achievement was to apply sophisticated economic theorising to the founding the theories of modern feminism in 1879s (and not the 1970s!).

For her any socialism had to strike at all kinds of oppression and involve both sexes on a equal footing.

Review Sunday Times, ‘This book takes you to a time when hastily written pamphlets had an outside chance to changing the world: a time when the Reading Rooms of the British Museum was one of the hubs of the intellectual universe.’
You have to love someone who said -  'Who is the fiend who invented house-keeping? I hope his invention may plague him in another world.'

Eleanor Marx Aveling (16 January 1855 – 31 March 1898), also known as Jenny Julia Eleanor "Tussy" Marx , was the English-born youngest daughter of Karl Marx. She was herself a socialist activist, who sometimes worked as a literary translator. In March 1898, after discovering that her partner and prominent British Marxist, Edward Aveling, had secretly married a young actress in June the previous year, she committed suicide by poison. She was 43.