BBC NEWS REVIEWS all about London 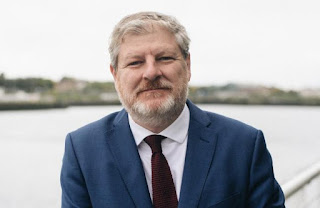 Journalist and politician Angus Robertson, claims The BBC London news broadcasters only report on the London papers. Wheras in other nations, they report from all the varied regions. And also from across Europe.
“The newspaper review presents different angles on the same story. He listened to all the European headlines. In Germany they report ALL the headline news from all the different regions – Bavaria, Frankfurt, Munich, Cologue, Berlin, Chemnitz. By contrast here the BBC Radio 4 morning press review, Today programme – ONLY reports on all the London based newspapers and on NO newspaper headlines from Ireland, Scotland or Wales!! Not only shocking but also shows why those in London have no clue what is going on elsewhere in the regions.
The BBC don't represent the country with their newspaper reviews
Very interesting article by former journalist Angus Robertson – “In Germany they report on news headlines from ALL the regions. Here UK they only report headlines from London and NONE from the Irish Times, Scotsman, Herald, or any Welsh or Yorkshire papers. Its no wonder those in London are totally ignorant of what is happening in the regions. (well Scotland is only a mere region to them).”
“The news sources were from across Europe – France, Le Monde or Le Figaro; Spain El Pais or La Vanguardia; Italy Corriere della Sera or La Repubblica; Finland Helsingin Sanomat in Finland; central Europe, Der Standard or Die Presse Vienna; Poland, Gazeta Wyborcza and Rzeczpospolita…more. it was important to reflect different news sources and stories from different countries.
“I was keen to hear details of the European Parliament elections results from different nations so I tuned into Deutschlandfunk, the German broadcaster equivalent of the BBC, with their news paper review. They included headlines and news angles from newspapers right across Germany, including both national titles and regionals - the Freie Presse, Chemnitz; Rheinische Post, Düsseldorf; Frankfurter Rundschau and Frankfurter Allgemeine Zeitung; Badischen Neuesten Nachrichten, Karlsruhe; Der Tagesspiegel and TAZ Tageszeitung, Berlin; Süddeutsche Zeitung, Munich; Kölner Stadt-Anzeiger, Cologne; Neue Osnabrücker Zeitung from Osnabrück and Landshuter Zeitung from Bavaria. German radio thinks it is important to reflect media coverage, journalism, news content and analysis from across the whole country.
“Compare with the UK’s flagship radio news equivalent: BBC Radio 4 morning press review, Today programme. I listened this week, and was struck by its total imbalance, so much so that I listened again on the iPlayer to double check and get the statistics right. By my reckoning there were just more than 60 newspaper or news website mentions in the press review between Monday and Friday. ALL were from London based newspapers! Guess how many were from non-London newspapers? There were none. Zero. Zilch. According to BBC Radio there was not a single headline or report worthy of inclusion from Scottish, Welsh, Northern Irish or English regional newspapers. Not one.
https://www.thenational.scot/…/17677878.angus-robertson-bb…/