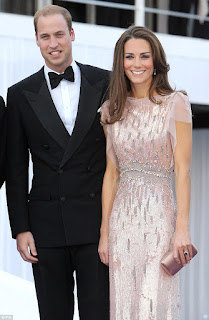 I post here mostly about music, art and words but I digress here...
Kate Middleton's Morning Sickness. I've been through it. I found it best to throw up an hour before meals! That way there was some chance of keeping the meals down, oh dear. Also have regular small protein snacks every few hours to keep blood sugar levels as normal as possible - nuts, cheese, tuna, oatcakes, whatever you feel able to eat. Drink water in small amounts regularly too. I remember even smells in the food stores made me feel sick! Especially raw meat.
Also - DON'T TAKE ANY DRUGS for morning sickness.
Sadly I was given an anti-sickness drug with my second pregnancy and had a very scary drug reaction several days later when my jaw started to freeze up and we had to drive to the emergency at the hospital. This drug allergic reaction caused me to loose the baby at 16 weeks a few weeks later. Drug allergies can be life threatening. My very strong advice is - DON'T take any medicine when you are pregnant.
I went on a few years later to have my beautiful daughter (not without the heartache of the loss though).  I was sick again this time and sorry to say sickness can last most of the pregnancy, while it was better the last few months - and I took no drugs this time. Who says having a baby is easy! Maybe if men had to carry babies there would be less war and bloodshed I've wondered? I couldn't watch the news when I was pregnant.
It may well be a girl for Kate - I had two boys and a daughter and was only sick with my daughter. I wish her well. : )
Ps Also shouldn't be called morning sickness, more like all day sickness. : (