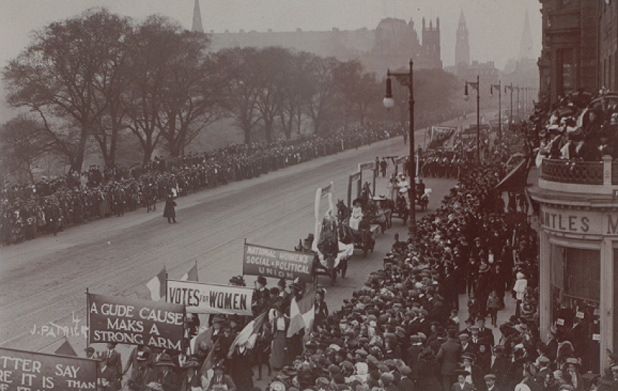 From throwing an egg at Winston Churchill, to a huge suffrage march in Edinburgh led by Flora Drummond on a horse, to the horrors of force-feeding  - Scotland's suffragettes and the more gradualist suffragists were an important part of the fight for women's votes.
Professor Sarah Pedersen, Robert Gordon University, points to the fact that Edinburgh had one of the earliest suffrage societies in the 1870s and by the period after 1905 Scotland was "punching above its weight" in the struggle for votes. There were plenty of opportunities to confront the establishment with then prime minister Herbert Asquith having his constituency in Fife and Winston Churchill as an MP for Dundee. When Churchill came to stand in Dundee in 1908 he was followed by 27 of the national leaders of women's suffrage movements. At one point he even hid in a shed and tried to hold a meeting there. 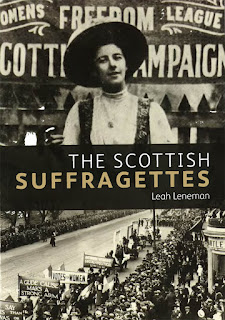 There was the burning down of buildings, the grandstands at Ayr and Perth racecourses, the pouring of acid in post boxes to destroy the mail or burning the slogan 'votes for women' into the greens of golf courses with acid.  Sylvia Pankhurst, daughter of Emmeline Pankhurst became a good friend of the Scottish Labour founder Keir Hardie -  he used to visit parents house.
"One of the things to note is that they were very careful not to actually harm or kill anyone with all these fires, the places they set fire to were empty. An important point for the movement in Scotland was a big rally in Edinburgh in 1909 led by the formidable Flora Drummond, riding on horseback. A key figure in the movement, she had grown up in Arran. Earlier in the year a group of women took part in a public art event, called "March of Women", from the Glasgow Women's Library to Glasgow Green. “

There had been lots of campaigning for the vote towards the end of the 19th Century mainly using methods such at petitions, writing letters and badgering members of parliament by the suffergists. Eventually they felt all this talking was getting them nowhere.
World War One impacted on the struggles. Many who worked as teachers, or nurses saw the reality of the hardships and inequality many women endured. One wealthy women, a Violet Markam, who was involved with the ‘Women’s National Anti-Suffrage League’ – but when she saw first hand in the war the struggles of women’s lives she changed her mind.  (They believed that giving votes to women would bring disaster and fill the electorate with ignorant voters!!)

**Women and Sport – Today in 2018 I believe more needs to be done for young girls playing team sports. I have three grown up children – two boys and a daughter. The boys always played team sports. In American men and women play softball together and girls are keen on soccer. Team sports such as rugby or football build up character and skills for being a team player.  I believe this is very important. 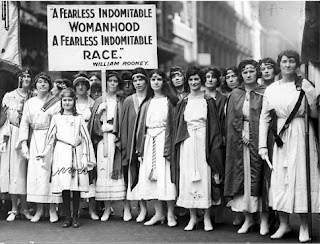