T in the Park 2006
Apart from the rain, T was awesome fun!  The Chillis were sizzling hot! the Zutons  from Liverpool were exciting; the Kooks look good but were a bit derivative; Guillemots were highly colourful and command the stage; Franz Ferdinand partied like the Beatles; Maximo Park rocked.
Festivals are a wall of sound and a celebration of music, where everything goes and the more outlandish or fancy the better. The best thing is that everyone is there to party and have fun - yes there is drinking, the litter, there is outside toilets (this is something I come back to), but mostly there is good nature friendliness and everyone is happy that they can be there to share with the best in music 2006.
The Kooks. They look cool with floppy hair but lack individuality with their sound. One song is like Bob Marley, the next like Sting, the next like the Kinks.
Maximo Park, They swing and rocked with some strong melodic songs and a memorable performance.
Hot new band from Glasgow the Frettelis were one of the best bands there/ They played the Future Tent and will surely be playing one of the main stages next year.
The top new bands for me were the Guillemots, Maximo Park and the Zutons.  It meant a lot to see the Chillis live as Flea is my son’s hero! He saw them at Murrayfield a few years back and since then has became an amazing bass player through listening to the Chillis over and over and over!
The Chillis headlined and were in a league of their own. Flea’s bass shook the ground with steady rhythms as John Fruciante soared his guitar.  Keidis lept into action around the stage and slid to the mic. His voice while unique, was also the most flexible instrument as it lept around the bass lines in a tight and exacting way. The crowd also leapt and sung, transported to another dimension for this period of time.
One young guy in a wheelchair had managed to get pushed to close to the front. Unfortunately a girl on her mobile ignored him, so he tried to push up on his arms to get a glimpse of his heroes on the stage. Everyone is so excited to see the band perform.
They sang their hits, and some longer set pieces where they get to explore their music more. Flea and Fruciante move close to each other on stage to play tight together.  This band is very much a unit. Their last song, By The Way, really got the crowd pumping, with a hot energy and euphoria. It is easy to see why this band named themselves – the Red Hot Chillis! 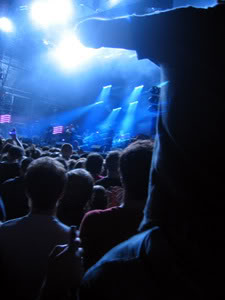 On Sunday the Who sent the crowd wild before the festival ended with a lavish fireworks display.
PS the toilets!  I was desperate when we arrived so I joined the queue at the Port– a-loos. It seems to take forever!! It turned out my line was only using one toilet because they felt two of the toilets stunk! I was really a bit taken aback with those holding their noses… These are outside toilets and not going to be the standard you may have with proper plumbing at home. My daughter was camping and someone asked her about the showers! She had taken baby wipes. There are hundreds of thousands at these kinds of events so things like showers or bins are not practical. I do have one suggestion for the toilets though, a BIN for toilet paper would be a good idea, as the paper clogs up the toilet.  This toilet experience was the only down side to an otherwise awesome time!