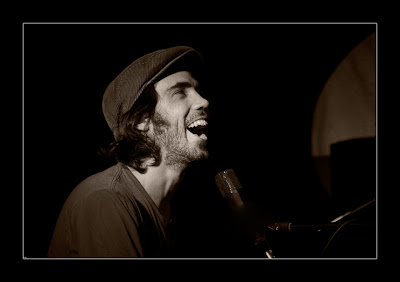 Patrick Watson @ King Tuts 19th Sept 2007
Bright Shiny Lights
Indie 4 piece from played King Tuts - were relaxed and having fun.
Richard Mailey, a fresh-faced young Irish man opened the gig, he has the power in his voice of a young Bruce Springsteen.

The Patrick Watson band offer lots of flowing space and fun theatrical percussion with their music. Patrick, songwriter and piano player and lead vocals puts everything in without doing too much, with the rest of the band bouncing off him. They used anything at hand – a balloon, a jacket over the guitar, effects pedals, more...
To start the set the drummer shook a soft percussion instrument in the space in front of his drum kit. This was not only about the songs or Patrick’s expressive voice, but about the energy of all four.

For the last number Patrick and guitarist took up position in the centre of the audience, and with the guitarist revolving on a small stool they conducted the audience with a ‘Man under the Sea’. For the encore Patrick sang with only piano the quite wonderful ‘the Great Escape'. Fun and engrossing.

I enjoyed the way this band mixed things up with light fun rhythms, echoing each other…. No rules, no genre - with playful percussion, varied soundscapes and expressive vocals.
Coming out of ’s fervent music scene, the band has a new album out ‘Close to ’ and you sense they come out of a rich heritage of blues, jazz and more and shake it up to make it their own.(Also out of - Wolf Parade and Arcade Fire. has a renowned Jazz and Blue festival in July. )