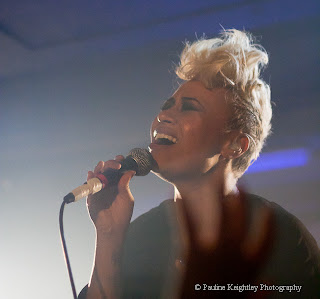 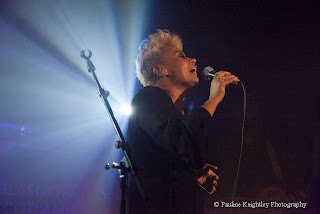 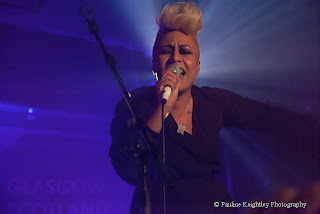 Emeli burst on the Oran Mor stage firing on all cylinders. I saw her gig here for her first EP launch in December 2006, when she sang her own songs and a Nina Simone song. I saw her again four years later at King Tuts in December 2010 and she has had a busy year since then with considerable songwriting success. In 2011 she has had The Mobos, her debut single Heaven which reached No 2 in the UK charts in October. Her second single Daddy is due for release in November and her album, Our Version of Events, will be released early 2012. Emeli spoke of how wonderful the past year has been for her and of her present number one song with Professor Green titled 'Read all about It.

Tonight, again at the Oran Mor stage, she owned the stage and took us on her musical journey through soul, gospel, rock and R & B.  Emeli sang the new songs from her upcoming album – as well as a medley of her past hit singles collaborations.

She sat at the keyboard for her song ‘Clown’ and said it was here that she started her musical journey before co-writers and more were involved.  She said this song was a favourite from her new album and we heard why. It was a beautiful haunting song when I wished I had remembered to bring my recorder with me!  She talked about the wonderful experience of writing with Alicia Keys in LA and sang their collaboration song which was titled ‘Hope.’
Emeli finished her set with her singles Heaven and Daddy and for her encore sang she sang 'Maybe' when the poignancy of her voice shone through with lyrics such as ' We can try a bit harder, We can make it work.'

She gave an accomplished and energetic performance. Her excitement to be performing her songs with a top band back home in Glasgow here where it all started was palpable. The venue was sold out as is the rest of her first intimate headline tour.
Her music is rocky and upbeat. It is also full of pathos and sits on the edge of our joys and sorrows. As Emily says herself..'This ain't no 'soft soul easy listening' but soul with a questioning edge.The expressive timbre of her voice sends shivers.  She states that her music is 'soul with a rocky edge' and influenced by artist such as Portishead, Massive Attack and Joni Mitchell.

I am now excited for her album release and I expect her album to be a smash success!
Emeli drew attention for her big soul voice when only 16. She attended Glasgow medical school and after obtaining a medical degree in Neuroscience, she decided to focus on her music. I wish her well for her album release. It is clear this lady doesn’t do things by half measures!  MORE Photos - http://pkimage.co.uk/
http://www.emelisande.com/ 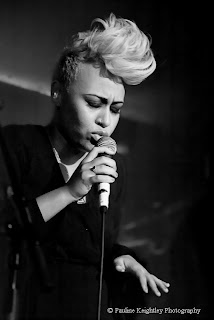