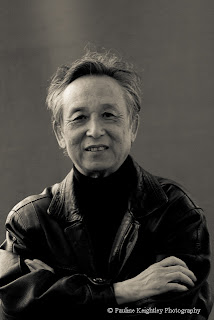 Goa is from China, after speaking out against the cultural revolution he now lives in exile in France, in his Second Life.  As happened in Russia after this country's revolution, the 'free thinkers' and the creative people have had to flee China.  He is a writer, poet, playwright and painter and I went to his talk this August at the Edinburgh International Book Festival 2011.
Goa discussed his views on the differences between the artistic genres and the aesthetics of the different art forms - he spoke of how painting is not literary, theatre is not literal, and the art of the narrative. He said that Literature has suffered from political interventions and it can subjugate literature when authors submit to politics. That globalization imposes also.
He talked of the necessity for literature to confront experience. Of how we don't understand 'Evil' and the 'Nazi' experience and how history could easily repeat itself. That people 'like to be led' as it is the easy way and how important 'independence' of Thought' is.
Gao had a deep serenity and calmness about him.  His paintings are very good and they lead the eye on mystical journeys. He talked of setting aside months to paint when he barely reads at all - because image and painting must come direct (without words). When he paints he listens to music and he feels that painting is beyond words.
Gao describes himself as a 'total artist' - creating novels, short stories, essays, plays, paintings and film.  His 'Ballad Nocturne'  continues his ongoing experimentation with dissolving and redefining artistic boundaries, and with melding aesthetic forms.