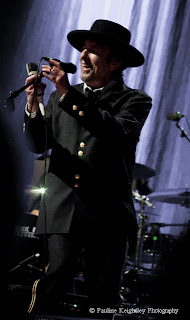 Dylan revisited his favourite sons and as the familiar song refrains start it's like going home again.
I went with my guitarist son, and he was nearly as overwhelmed as I was! Dylan performed more than I expected. At the SECC Glasgow in 2006 we were further back and all I remember was Dylan hunched over the keyboards. Happily for this gig he even smiled a few times as he faced the audience at the mic for several songs when he squatted slightly and seemed to enjoy himself. It is simply inspiring to hear and see him live...

I noticed the admiration and awe of his band as they strove to embrace his music. His lead guitarist lent forward towards Dylan at the keyboards as if to draw from his wisdom. His band did excellent work of expressing the songs.
I could feel the reverence of the crowd at the front and this is serious business being a Dylan fan! Few are drinking. Most have travelled to many Dylan gigs - and have seen him ten or twelve times at least. One fan beside me saw him in the 60s at the Edinburgh Playhouse when Dylan was 24 and had just gone rocky.  And yes he was seventy too, the same age as Dylan is now.

Highlights Songs - Full Set List below. Songs: It Ain't Me Babe, Tangled Up in Blue, Simple Twist of Fate, Desolation Row. For his encore Dylan sang Like a Rolling Stone, and All Along The Watchtower. Mark Knopfler supported (think Dire Straits and Money for Nothing ) and he gave a very capable performance. I'm not sure what it is like supporting a master craftsman like Dylan and many artists of any calibre must feel second rate.

Dylan's songs and stories tell of the contradictions in life as they hit reality square in the face with his hard-hitting lyrics, voice and tunes. When he moved from Duluth Iowa to Greenwich village New York, Dylan soaked up many diverse influences for his music. Dylan has piercing eyes and a cracking, scorched voice just like the blues singer Robert Johnston he so admires.

He takes us to the other side of his songs. Perhaps we hope he might take us to that promised land? Going to see Dylan live is like a pilgrimage and you meet many other dedicated disciples on the way there and on the way back. You either get Dylan or you don't - and you have to go to him he doesn't come to you.

None of the usual descriptions can really apply to Dylan.  Music is his life.  How can I possibly write that his lyrics are colourful or deep when these words sound such simple clichés.  Dylan has opened my eyes, perhaps he shows us the promised land is possible.
It is wonderful to be alive in the time of a poet like Bob Dylan.  A comment from Rab Noakes -
'I can't imagine my life without Dylan in it.'  Bob was on great form last night. Good-natured, good song-choices, good band esp Charlie Sexton.' 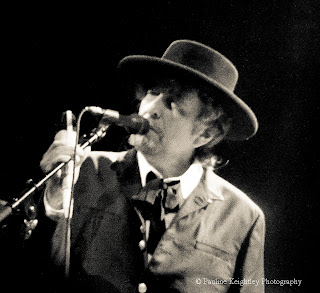 There is a site for Dylan's set lists and lyrics (thanks to the fan beside me told me about) called boblinks.  - http://www.boblinks.com/