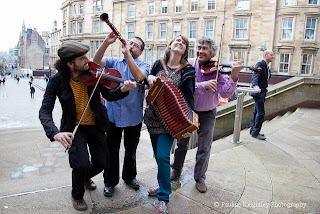 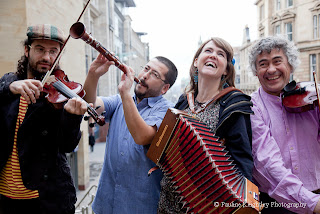 The Press Launch for Celtic Connections 2012 was held in Glasgow on Tuesday 25th October 2011.  Chaired by the festival's Artistic Director Donald Shaw, he announced there would be a political thread to the festival in 2012. This will be the 19th year for one of the world's largest winter music festivals. Shaw spoke of the Arab spring and other recent world wide revolutions and how music was often interlinked and can offer hope of a better life.  How some folk music has become too mainstream and lost the power of offering a voice to the people.  He spoke of how popularity can get in the way of what an artist has to say.

There will be 300 events in 20 venues across Glasgow. Celtic covers folk, roots, world, traditional, indie, Americana, bluegrass and jazz music.  He said that folk and trad would continue to be at the heart of the festival, with artists such as Shooglenifty, Session A9, Blazin fiddles, Treacherous Orchestra, Salsa Celtica, and more. Highlights will include a celebration concert for Gerry Rafferty who died last year and also a concert for the Woodie Guthrie Centennial with Sarah Lee Guthrie. The international line up will include Bela Fleck and the Flecktones, Bruce Hornsby, Jack Bruce, Justin Currie, Martin and Eliza Carthy, and KT Tunstall. The Festival club will be held this year at the Apollo 23.
A core of the festival is its educational program. There was a BBC Live Radio Scotland show that evening which included Spanish band Sol i Serena.

I sat beside Scottish songwriting legend Rab Noakes who is involved with the Rafferty concert and was a founding member of Stealers Wheel - I expect will be a sell out very soon!  As will the ever popular 'Transatlantic Sessions', which last year toured and includes American dubro player Jerry Douglas and Scottish fiddler Ali Bain. I enjoy Celtic for the unique collaborations it offers. 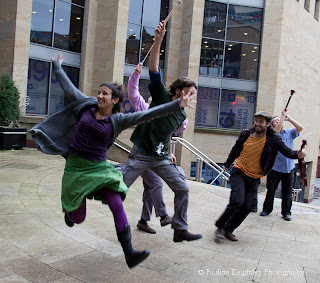 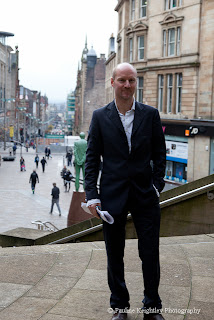