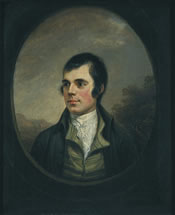 I visited the recently refurbished Scottish Portrait Gallery a month back and left somewhat disappointed. It is housed in an imposing sandstone building that sits on the corner of Queen street and down from George Street.The gallery owns 3,000 paintings and sculptures, 25,000 prints and drawings and 38,000 historic and modern photographs.

I can’t help but wonder that it’s location amidst the Hanoverian Edinburgh new town has affected the choice over whose portrait is considered important enough to be displayed in the new collection – rather than be stashed in it’s rather full basement. I wasn’t sure what I had expected after reading the hype but certainly a gallery proud of Scottish heritage and reflecting both Scottish traditions and Scottish contemporary artists with the main focus on portraiture. However many of the inclusions appear obscure.

I went with my two older children and they were not impressed either. They thought the boring dark images of past kings and queen, who all look the same strangely, held no interest for them. My son was puzzled by the inclusion of a whole section of shiny and not very good photos of Asian families which he said seemed rather incongruous.

The photographic images that stood out were - Mark Neville - Port Glasgow Town Hall Christmas Party 2004; Oscar Marzoroli - The Castlemilk Lads 1963, an iconic image by an Italian photographer; A Photo of Bob Dylan in Princes Street; the portrait of Robert Burns and of Mary Queen of Scots on the third floor.

The gallery celebrates many respected photographers, which is fine, but there lacks an emphasis on portraiture. Many of the most significant Scottish writers, poets, artists, and musicians appeared to be missing and the displays seemed ill thought out. I was puzzled by some of the inclusions as to why they were considered portraits at all.
Scottish Writers, Poets, Artists and Politicians Not on Display -  Liz Lochead (Scottish Makar), Carol Ann Duffy, Hamish Henderson, Norman McCaig, Sorely MacLean, Iain Crichton Smith, Jim Kelman, Alex Salmond, Gordon Brown...
Today I read an article in the Scotsman (below ) and agreed with so much of it. (Extract below) Lesley Riddoch points out that the Portrait gallery appears to focus on the Upper Classes and in this sense does not represent the inclusive forward thinking Scotland of today.


THE National Portrait Gallery lacks images of Scots the general public would recognise or could name, writes Lesley Riddoch, May 2012
Is the Scottish Portrait Gallery capturing the zeitgeist of modern Scotland? Is it meant to?
Reaction to the gallery’s renovation has been overwhelmingly positive since it reopened at Christmas. There’s no question the building’s interior looks splendid – but what about the contents? I found myself mightily disappointed by the relative absence of modern Scots on display and slightly bored by the much larger areas given over to “imperial history.” Hey ho, I thought. That’s just me.
But then last week, the genial giant and subversive sculptor George Wyllie died and I found myself thinking about his curious absence from our National Portrait Gallery. George was universally popular. With the Straw Locomotive, 80-foot Paper Boat, giant nappy pin outside the Glasgow Maternity Hospital and Walking Clock outside the bus station, George fused everyday life, industrial heritage and Glasgow humour together like a master welder.

When artwork for the M8 was first proposed, George suggested an empty candelabra at the Edinburgh end and lit candles at Baillieston. In a world where culture is still the preserve of the few, George was a democratising force. Everyone who saw his sculptures and installations could hold an opinion about art. The Straw Locomotive hoisted up on Glasgow’s Finnieston crane was fun, daft, spectacular and – swaying gently over the largely shipbuilding-free landscape of the Clyde – profoundly sad. I think it’s no overstatement to say the man was loved. And yet, there is no image of George Wyllie on display in Scotland’s Portrait Gallery.
It strikes me the decision to axe the previous large display space for 20th century portraits was the wrong call. The hopelessly inadequate ground floor space means portraits of modern Scots can only be shown on rotation. One critic praised the gallery’s renovation but commented: “The final display here feels cursory and ill-thought-out. A mishmash of colour photos of celebs such as Susan Boyle and David Tennant is all very well, but where is the former Lord Chancellor Derry Irvine or, for that matter, Scotland’s First Minister, Alex Salmond? Most surprising of all is the absence of both Tony Blair and Gordon Brown.”
Is the “people’s” culture always destined to be tucked away from the majestic mainstream lest it clutter, belittle or diminish “important” collections? “Important” in whose eyes and from which cultural perspective? Who runs Scotland’s “national” galleries and who are they running them for? Scots need space to see ourselves as we are today – shaped as much by the fresh currents of the last century as the powerful tides of centuries past. We need to see how modern artists view modern Scots – and those talented artists need commissions. If such work isn’t meant to be in a National Portrait Gallery then where should it be? Those priorities can be changed. Gallery bosses can restore the 20th century floor pronto and set up a fund to commission (and display) more contemporary portraits.