*Where are the Troubadours? 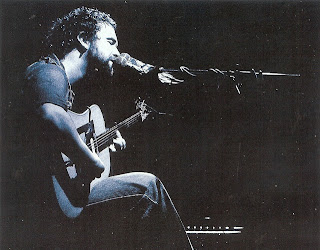 'The highlight of my career? That's easy, Elvis recording one of my songs.' Bob Dylan.

Our most loved singer song writers become like our best friends.

In ages past there were Troubadours who toured their songs. It used to be (not so long ago too) that young artists would get out and perform on the circuit of live folk clubs, uni refectories and local bars in the UK and Europe and elsewhere. It used to be not so long ago that creativity was alive and well in the world of music. Back then it was all more organic rather than a production line. Musicians then played 'residencies' where they might hone their song craftsmanship through the varied experience of playing to a live audience. In the 50s singers toured with the Big bands and money was made through the Publishers Sheet music.

Since the advent of recorded music the Studio (and therefore Radio too) has taken precedence in music. Recorded music has led to a break down of boundaries of place and time and has also brought about vast changes to our tastes. The drums of Africa have mixed with the European folk tunes, the sitar with pop, the jazz clarinet with the violin solo, the rock of The Who with modern electronica.The advent of the iPod broadened our taste yet again with thousands of instant tracks. Of course 'quantity is the opposite of 'quality.'
There are problems now over who should define or select the great from the average. Who are the 'experts' in music anymore? There are the taste makers the Labels, the music reviewers and music websites. It used to be that the Royal Court would decide which artists to commission - who decides today?

I read about writers and producers Jerry Leiber and Mike Stoller.
They wrote - HoundDog, Stand By Me and many other great rock and roll hits. Yet how many have heard of these incredibly gifted artists? I don't understand the system at all and I am not an Elvis fan for a start - give me the singer songwriter any time. Apparently Elvis added the line to HoundDog 'Aint' nothing but a rabbit and he ain't no friend of mine.'
For me the voice of the writer of the song simply has more to say to me.

Quote from Mike Stoller, 'Beyond the brilliance of his mind and the mastery of his story telling, Jerry had in abundance two beautiful qualities that guaranteed his immortality. Jerry had spirit and Jerry had soul. '
'He could sing - and man, he sang as midnight. By the way he interpreted lyrics, we were sure he'd grown up in the same ghetto as us,' Quote vocalist Carl Gardener.

It is only through knowing the 'knowledge' of the 'old' that the young can build something great. There are still some great Troubadours here in Scotland, who have great individual strength of character and something that matters to say in their voice, music and songs - Dick Gaughan, Michael Marra, Rab Noakes.... I'm just not sure where the young Troubadours are though?