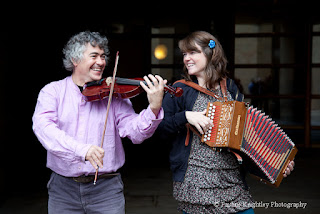 Celtic Connections 2013 line-up was announced last week, with some of the biggest names in folk, blues, jazz and traditional music landing in Glasgow to celebrate it's 20th year. Across two weeks, 2,100 artists from across the world will play at 300 events. Celtic is one of the world's biggest folk festivals with many sell out events.

The festival will host some big names in the folk world - Kate Rusby, Cara Dillon, Salif Keita, The Mavericks, Jerry Douglas, Aly Bain and Dougie McLean. Its well renowned Transatlantic Sessions; Gaelic concerts; Showcase Scotland; World Music; Americana; Blues and Jazz; ceilidh nights at the Fruitmarket venue and much more!
Plus younger folk and Indie artists - Bellowhead, Aimee Mann, Roddy Hart will perform.
The festival is also a stomping ground for new talent with open mic sessions at the concert hall with The Danny Kyle Open Stage which is well worth checking out. The Glasgow concert hall is the central venue for the three week festival. The festival includes many dynamic and unusual collaborations, so watch out for those.

Artistic Director Donald Shaw -  At no other festival do musicians embrace the opportunity to collaborate with acts from different countries and musical genres quite like they do at Celtic Connections. As ever in our 20th year trad and folk will be at the heart of the festival but other musical genres such as world, jazz, blues, electro, Americana and Country will also be showcased.”  Celtic is promoted by Glasgow Life.

TICKETS ARE NOW ON SALE -  http://www.celticconnections.com/

Celtic Connections gallery - http://pkimage.co.uk/celticconnections
Salif Keïta. Salif is famous for taking his West African roots and infusing them with pop, jazz, Latin and Islamic influences, for a truly unique performance.