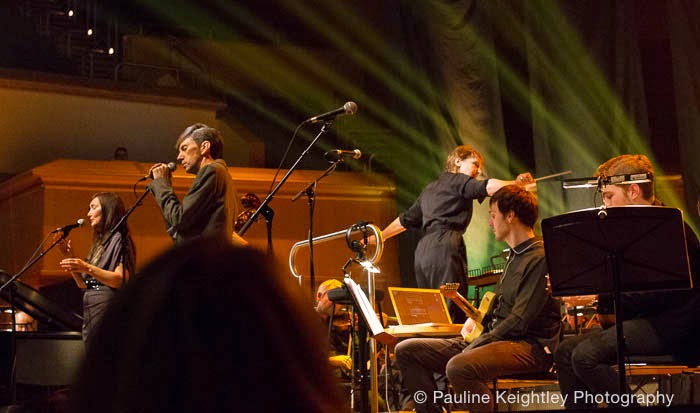 The stage was set out wide over the first few rows to accommodate the full orchestra of the Scottish Opera on the concert hall stage - and I knew we were in for a treat! The concert was one of the sell out shows of Celtic Connections.

Armstrong is an award-winning Scottish film composer who has written music for films such as Romeo and Juliet (1996), The Great Gatsby (2013), Moulin Rouge and many more.

The Songs included -
Weather Storm, This Love (The Space Between)
O Verona, Balcony Scene (Romeo and Juliet)
One Day I'll Fly Away, Nature Boy (Moulin Rouge)
Infinite hope, Louisville, Lets' Go To Town (The Great Gatsby)
The Love Theme (Far From the Maddening Crowd)
Main Theme (The Quiet American)
Let It Be Love (As If To Nothing)
Dust, Crash, Powder, Strange Kind of Love, Lontano, Sing, (It's Nearly Tomorrow)

Behind the orchestra scenes from the movies he has scored were shown, while movie-like coloured spotlights hovered over the orchestra.

I particularly enjoyed Jerry Burns subtle performance of Dust, with her ethereal, haunting voice and The Love Theme from Far From the Maddening Crowd, and the very poignant and gripping finale of the Balcony scene from Romeo and Juliet.

Every year at Celtic I am astonished by the musical talent today in Scotland and beyond. Armstrong who graduated from the London school of music and is from Glasgow, is a wonderful example. He then served his musical apprenticeship at Glasgow's Tron theatre. The concert proved exhilarating, poignant and joyful.

Armstrong sees no difference in credibility between popular and classical forms of music and he has collaborated with pop bands such as Massive Attack and as well as writing compositions for the SNO (Scottish National Orchestra). Film music has brought the full orchestra back into the mainstream and into peoples lives.