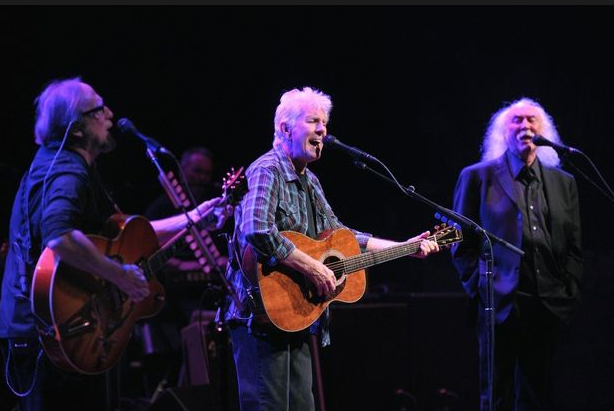 I'm a fan of perfect male harmonies. There were so many great examples during the 60s - The Everly brothers, The Hollies, The Beatles. And then there was the southern California sound of the Beach Boys, The Byrd's - followed by Crosby, Stills and Nash (CSN) and later the Eagles.

The Gig
On stage CSN have set up three Indian carpets and Nash dances often in the centre in his bare feet., Stills plays full on rock n roll guitar and David Crosby has striking white hair now.

They began with strong rock band songs with their impressive vocal harmonies and backed by a quality band. They performed their hits - Marrakesh Express, What's' That sound, Southern Cross, Love the One Your With.
In the second half they each showcased their own material - Nash with the reconciled Myself at Last, Stills rocking up the energy with throbbing guitar on Virtual World and Crosby with a mesmerising What Makes It So.

It was notable that Crosby has more blues and jazz influences in his song writing.  At one point Crosby said – that Nash wrote anthems the world enjoyed to sing, Stills wrote the rock and roll and was one of the top rock guitarists, while he, Crosby wrote the weird stuff!  The trio finished their set with two of their biggest hits - Teach Your Children and Judy Blue Eyes - which got the audience to their feet.

Impressions
This is very much a trio of equals – vocally and musically, coming together and also following their own musical individual styles.
The combination of their distinctive styles, also the American, Canadian and British mix, produces a unique blend of rock, blues and melodic pop.  Impressive gig.

From the outset, the band decided not to be locked into a group structure. They used their surnames to ensure independence and so the band could not continue without one of them.