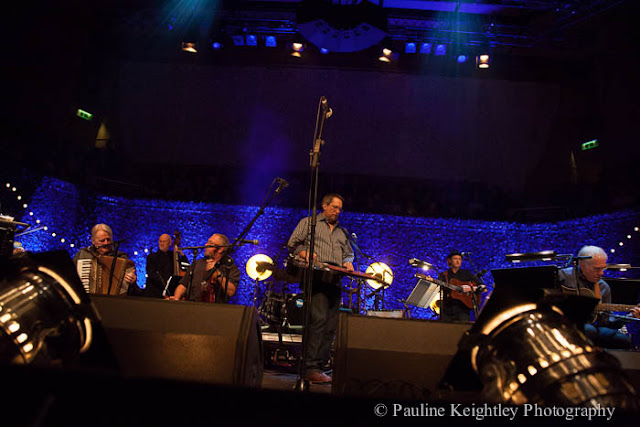 Diversity, excellence, harmony, quality voices, top musicianship.
This is my ninth year of Transatlantic Sessions. I enjoy a seat in the front stalls of the concert hall and it feels like being transported on an escapist, joyous musical journey. This year the stage had a textured blue backdrop adorned with yellow lights – and along with the cream of Scottish and American folk music talent that confirms this concert as being the jewel in the crown of  ccfest.
The TS concerts vary – some are full of that joie de vivre so hard to describe; some are more escapist; some are poignant, some are full of perfect singing and instrumental solos; some are a subtle mix of emotions and hitting the right tone – and some combine all of these elements.There is the quality of musicianship and instruments, along with the depth and assuredness of a supreme band that all blend together to produce the perfect balance.

For tonight’s concert we had a truly high calibre of singers with Rhiannon Giddens, Karen Matheson, Cara Dillon, The Milk Carton Kids, Joe Newberry with their contrasting vocal styles.

We were treated to fine tunes written by Scottish musician Phil Cunningham - played by himself and his long term partner the accomplished Shetland fiddle of Aly Bain. Bain always makes his skill look so comfortable and so easy! Also the quality tunes from violinist John McCusker and the talented Michael McGoldrick on flute and Northumbrian pipes. 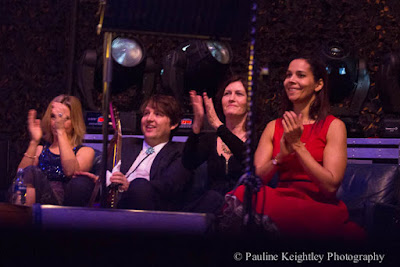 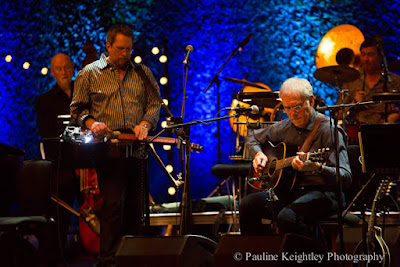 *A highlight of the night had to be gospel soul and opera singer Rhiannon Giddens who brought the first half to a dramatic conclusion. She sang of spiritual heartbreak with her powerhouse, absorbing voice with her unusual dynamic and energy. In her red dress she smiled and danced as she waved her arms wide.
Her personal history is an unusual mix of southern families – of African-American, Native-American and European-American.

She spoke of the importance history of the songs and she gave a powerful interpretation of an Odetta song, of the 1855 civil war and slavery She's Got You and also Black is the Colour. Her first solo album Tomorrow is My Turn has been receiving rave reviews. She sings with the band the Chocolate Drops.

I remember visiting the Smoky Mountains - we stopped at an old ruined township and took time to visit the graveyard where we noticed so many were Scottish names and many were very young, Life was tough for many of the original pioneers here. The Scottish stories and music travelled with them over 200 years ago and our ties to America are strong ones.
Highlights are also the singing with such a quality band!  The Transatlantic band 2016  - Aly Bain, Jerry Douglas, Phil Cunningham, Danny Thompson, Russ Barenberg, Mike McGoldrick, John Doyle, John McCusker, James Mackintosh and Donald Shaw.
Transatlantic Sessions Photos - http://pkimage.co.uk/transatlanticsessions2016

Rhiannon Giddens  -  She's Got You &  Black is the Colour