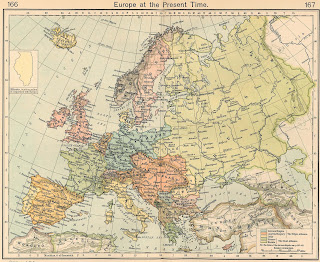 The UN states – ‘peoples have the right to self-determination. There is no reason for a majority in a country to subjugate an unwilling minority. ‘The UN had 51 seats in 1945 and in 2017 now has 193. Change has been towards the smaller nation states.

The Kurds were divided up by Britain and France – as spoils of the Ottoman empire and the Provinces after WW1. This year both the Kurds and Catalonians were recently voting for their independence. Shockingly the Spanish government used brute force to try to prevent the Catalan vote. The BBC was not reporting on this either. The difference between a "made-up country" and an "authentic nation state" is that the real nation is like a centuries old tree with deep roots and many branches.

A century ago a map of Europe in 1914 before WW1, there were far fewer countries in Europe – when three huge empires were shrunk in size - Germany, Austria-Hungary and Russia. Germany had then included parts of Poland, France, Denmark, Belgium and Lithuania.

Dutch tycoon Freddy Heineken in 1990 wrote of a ‘Eurotopia’ of small countries of between 10m and 5m.
In todays Internet world of fast media and connections and improved communications (radio, tv) and fast travel – and we don’t need centralized control anymore.

Do we need empires anymore? The direction of travel today is towards the smaller nation states in a bigger trading block and away from `empire building.
Excellent letter in the National - saying the difference in Catalonia is that they have control of their media, a truly devolved region unlike Scotland. Compared to the problem here in the '2014 Scottish Referendum' - when Westminster controlled all the media, all th print  press here and all the unionist parties too. What hope had we? I remember my son saying, how could we have self determination without any media? I met a Norwegian film maker in Edinburgh, and I was explaining to him that Scotland, unlike Norway, has no oil fund. He asked where did the money go - he may well ask!? I told him Shetland has an oil fund though...
http://www.maps-of-europe.net/old-maps-of-europe/
Is 'take back control' really about - take back control to Westminster from the devolved governments