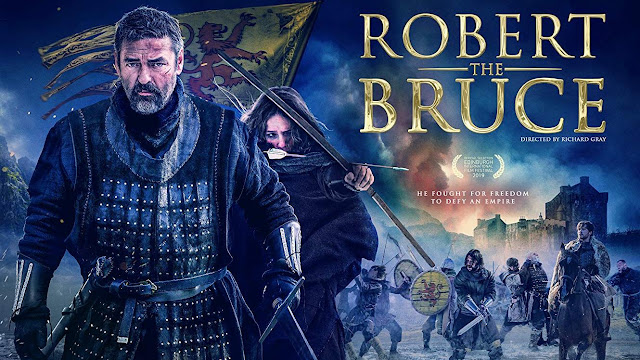 Shocking. A huge movie project for Angus MacFadyen. Huge support - so why is Cineworld refusing to show this Robert the Bruce film? Blocked? (Cameron also stopped 'Outlander' being shown until AFTER the 2014 vote oddly. Why can't we acknowledge and understand our differences - they are what make us stronger, not weaker.) Other questions, why did Creative Scotland back 'Outlaw King' with American lead Chris Pine - but not 'Robert the Bruce.' And why exactly is King Robert an outlaw anyway? Strange goings on if you ask me....`i hope to go see the film at an Odeon cinema soon, films need support in the cinemas.
I was wondering, why the powers-that-be down south, enjoy Scots stories that include massacre or Scottish downfall - such as Mary Queen of Scots, Culloden, or other defeats. Rather than any Scottish success stories - Enlightenment, innovations, great songs, art and more. Odd really? Especially when they claim to support the UK Union so much? What other country mocks or puts down a part of itself or a partner
https://www.firstshowing.net/2019/first-uk-trailer-for-robert-the-bruce-film-starring-angus-macfadyen/

We have known Scotland clutched in the grip of a mighty hand… now we'll set her free!" Signature Ent. in the UK has unveiled a trailer for the action drama Robert the Bruce, made by Australian director Richard Gray (of Mine Games, Blinder, The Lookalike, Broken Ghost). Robert the Bruce is a hard-hitting historical epic covering the turbulent time after William Wallace's victories depicted in Braveheart. The epic story of one of Scotland's greatest heroes will be premiering at the 73rd Edinburgh Film Festival this month. Angus Macfadyen stars (playing the same role he played in Braveheart) with Jared Harris, Zach McGowan, Daniel Portman, Emma Kenney, Melora Walters, Anna Hutchison, Talitha Eliana Bateman, Patrick Fugit, Gabriel Bateman, and Kevin McNally. This also features original music from Scottish national treasure Lulu. Looks a bit dry and talky, but perhaps still an invigorating film about a great legend.
Scotland 1306, Robert the Bruce (Angus Macfadyen) crowns himself King and takes the ambition of Scotland’s freedom as his own. But he cannot overcome England’s power: defeated again and again, his army is scattered and Scotland’s nobility abandons him. Hunted, with a price on his head, he finds himself alone and wounded. The cause of freedom seems lost once more. Hidden secretly in a secluded croft of a clan pledged to England, and close to death Robert is nursed back to life by a young widow and her orphaned children. His determination to do what is right, regardless of the cost, reinvigorates his passion to rise again. But it’s not revenge he desires. It’s freedom. Now. Robert the Bruce is directed by Australian filmmaker Richard Gray, director of the films Summer Coda, Mine Games, Blinder, The Lookalike, Sugar Mountain, and Broken Ghost previously. The screenplay is by Eric Belgau and Angus Macfadyen. Signature will release Robert the Bruce in UK theaters starting June 28th. No US release is set yet. First impression?