Good Reviews for Rebecca Fergusson and for X Factor Runners-Up 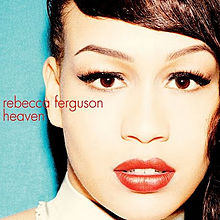 On a different note - Both Olly Murs and Rebecca Fergusson’s albums have had good reviews in the Sunday Times, even though both are X Factor graduates and Runners-up!
I went to listen to Rebecca's album and it is really rather good and authentic. She was a favourite of mine in the show in 2010.
Rebecca's debut album 'Heaven' has been receiving top ratings and reviews in both the press and radio. The Independent gave Rebecca a very positive review, claiming "By the law of averages, talent-show telly has to throw up at least one genuinely serviceable talent every ten years or so, and Rebecca Ferguson is surely that one." I thought this review somewhat poignant and are these 'experts' realising at long last that their prejudices against Reality artists are in fact based on ignorance?  Interestingly she insisted on writing her own songs so she might be authentic and Syco let her!  http://www.rebeccaofficial.com

For the winners of these 'reality' shows the label fixate on the 'demographics' that slot people into a 'Type' and  the importance of targeting who their music will supposedly appeal to . By contrast the 'Runners-up' have less pressures on them from the label and from the controlling voice of Simon Cowell.

It is all too easy to slag Reality tv off and it does have many flaws, while many bands and artists are 'put together' behind the closed doors of the industry and this 'developing' artists has gone on for decades, ever since the recording industry started.  I prefer some fresh raw talent to the 'over-polished formula' of the Guildford school graduates. The mantra should be about hard work and effort.

The X Factor is another Promotional Tool for the Music Business.
Rebecca Ferguson Review -  Telegraph,"After 12 years, reality TV has finally turned out someone who not only has the hallmarks of a real star, but is also an artist in her own right." Quote Rebecca, "Syco have been really brilliant – as soon as I put my foot down they back off completely. I just wanted songs I'd written on the album. At first I was going into sessions with writers who'd pretty much got all of the songs done already. But I told management they needed to let me write it because otherwise no-one's going to think I'm a credible artist. Then they let me just go into sessions on my own – I couldn't believe it.

What does scares me with music today is the ‘big American Media Conglomerates’ such as Warners and the damage they inflict on real music. Those XFM American radio Playlists and their cheap mindless sounds – all about gimmicks, dancers and pyrotechnics….