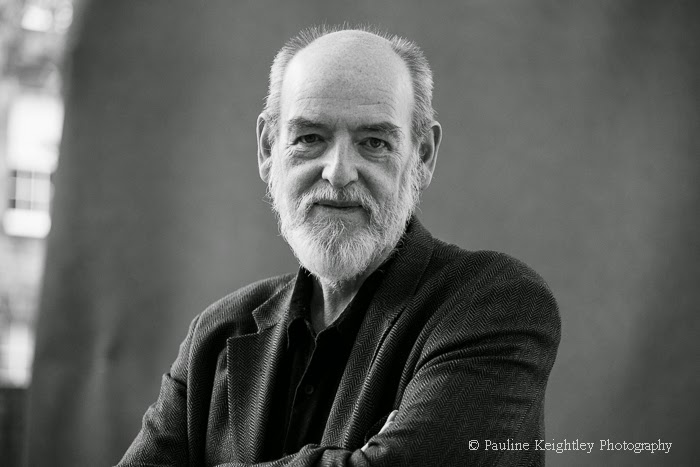 Bell gave an informed and entertaining chat on the most famous songwriter for more than a generation, of our times and also timeless, with fellow Scottish journalist Alan Taylor at Edinburgh International Book festival 2014. He said Dylan was enigmatic, elusive and perhaps unexplainable and hard to unravel. When the character that he created became successful was Dylan content with what he had created? Dylan's time as the folk singer of protest songs was only brief and he shied away from any leadership role. He was an artist, not a leader. He thought art tends to flee when politics arrive and that is propaganda and not art.

Dylan always had a need to reinvent himself. Bell said he was a brilliant editor of verses. He was both defiant and fearless, and he doesn't care what others may be doing.  He was also terrifically ambitious.

Bell said Dylan's 1974 Blood on The Tracks was an extraordinary return to an even higher artistic form.

He said although Dylan's Chronicles was embedded with many quotations he wasn't allowed to quote directly from his autobiography. Dylan wrote about how he steals. The fact is all artist steal it just depends how we do it and what we do with it and with the worldwide web its just all become a much hotter thing to deal with.

He spoke of Dylan's Bootleg series and that some are terrible recordings but we need them to understand Dylan. He said that Dylan was royally ripped of by his first manager Albert Grossman.
Bell thought today's generation has it too easy with access to millions of artists. Back then you followed the artists, curating material. In a sea of music, authenticity becomes important to a minority.

Dylan was influenced by poetry, American history, Joan Baez, Robert Burns and the Scottish border ballads. He took bits and pieces from My Hearts in The Highlands. He then stepped away from any political commentary in his songs such as the Vietnam war.

Ian offered some favourite song lines. We all have them, any of us long time Dylan listeners - although he said he didn't particularly like to have favourite ones.
'Ain't it just like the night when your tryin' to be so quiet/  Once upon a time you dressed so fine,
'I'm not There' was a favourite song he said, about those connections between what you understand and why you understand it. 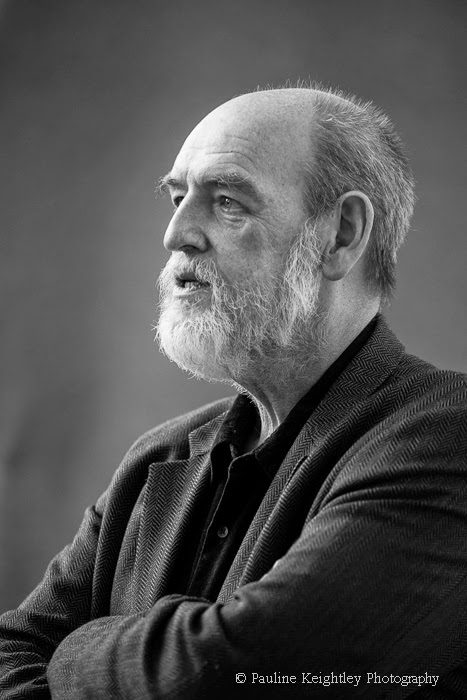 He said that Dylan had a 'Burned cathedral of a voice which worked, especially for Dylan the live performer.' We know Dylan through his songs.


He felt there was something to be gained by knowing Dylan's life, times and art - and how the three work together. 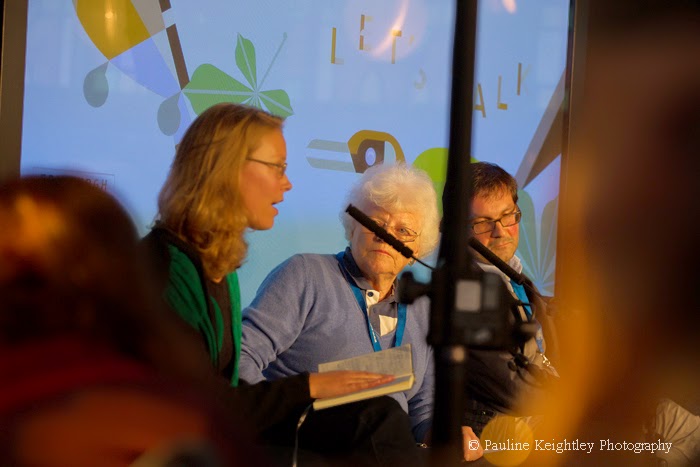 The dead wood press is now selling a quarter what it once did and that most of the Scottish press is now under foreign ownership.


This event was hosted by journalist Ruth Wishart, and with fellow journalists Iain MacWhirter (Herald) Stephan Khan (Observer London) and Niki Seth-Smith (Common weel).
They spoke of the vigorous diversity of the Referendum debates in particular online websites such as National Collective, Kiltr, Bella Caledonia etc.

Iain MacWhirter (Herald)
He said that professional Journalism allows for long form research.
He talked of Online Journalism. Citizen journalism provides more and cheap instant views, when journalism becomes often opinion journalism. Media used to be the privileged elite but now everyone has a voice.  There is a difference between sharing information though, instant opinions and researched facts.

The Decline of Scottish press stood at a drop of 100,000 sales per year, that it maybe had 5 years left. .
Most of the Scottish press was now foreign owned and The Scotsman had been taken over and had become the Daily Mail of Scotland. He said the dead tree press (professional journalism) are the cultural curators. The business model doesn't work on the internet though and the trouble is that real journalism cant' be done for nothing.

He spoke of the one-sided media right now in Scotland which is hostile to independence.  What is happening here would be illegal in Scandinavia as the constitution is to have diversity of press.
We have only had the one newspaper here - The Sunday Herald - supporting independence in Scotland.  He said that the BBC is still dependent for news on the dead tree press.

Stephan Khan (Observer London) spoke of the plurality of press
He said the new consumer was more sophisticated. The problem with new media is there was often no raw copy and no research online.

The question now is what happens after the Referendum.
There was good online media and entrepreneurship but which do too often relies on press stories.

He said, 'Comment is free, facts are sacred.'
He spoke of the need for objectivity and the blurring of the line between comment and fact.  Journalist will also make academic papers readable for the general public.
Niki Seth-Smith (Common weel)  stated that online there were also often multiple drafts and editorial time too to provide decent facts with rigorous fact checking.

MacWhirter suggested public funding for say a National Enquirer paper that was for factual news gathering rather than opinions or speculations and to help to ensure diversity of expression was properly informed. 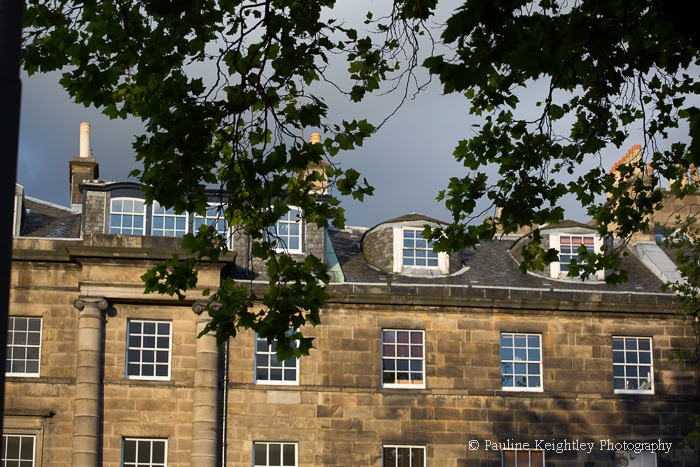 The BBC is struggling with devolution or what it is really about.  Scotland has national politics and no national press. I notice now that many of the respected in this debate are not going on the BBC news programs - understandably.

They thought that the best bet for small democracies was an open democracy that also pays contributors.
Twitter feeds are difficult at reflecting on news with no longer articles and they felt that Print still has a future. 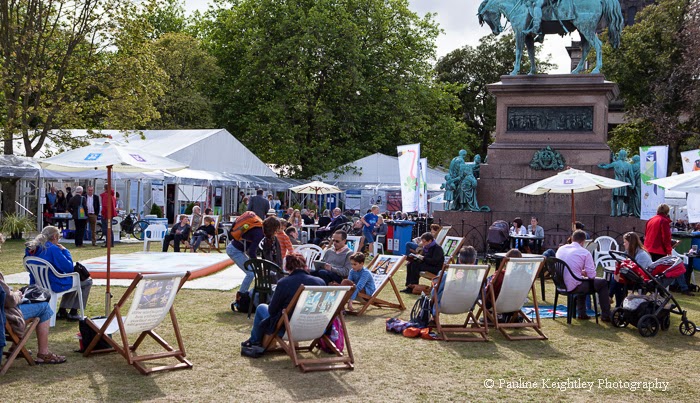 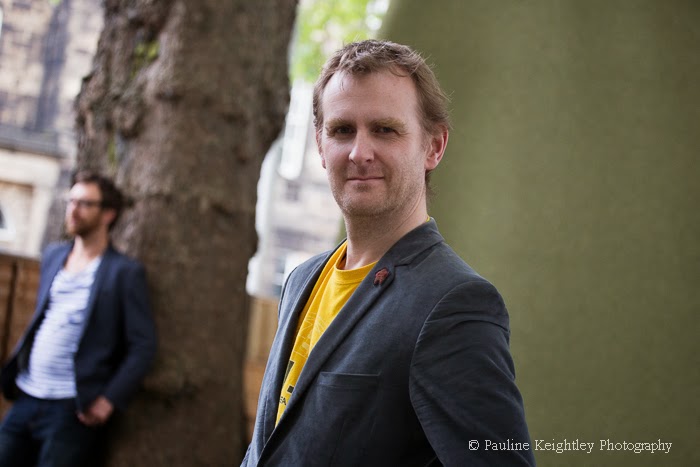 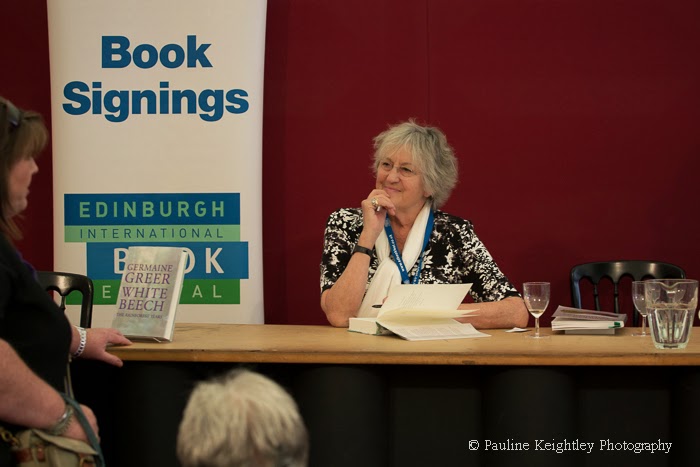 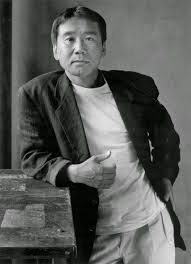 There was a definite hushed awe over Murakami's rare appearance at a book festival.  Twenty years ago he started the ‘Wind Up Bird Chronicles’.  He usually writes in the first person narrative and he said he was uncomfortable with using the third person - that he didn't want to look down at people, but to rather stand on the same level as his characters; it was more democratic he thought. He said his writing has been a long journey.
His first novel appeared in 1979.  He appeared unassuming and reclusive - he said that he wished to be a quiet person and to live a quiet life. He wrote about extraordinarily strange people and events though!.

He appreciated strong interferences to push the story forward.  He enjoyed irony he said and many of his stories are terrifying and scary.  He spoke of the bloody histories and the collective memories of history and he thought that everybody is cursed and poisoned by the past. The Manchurian history was important for his writing.

The Well. He spoke of his lifetime dream to be sitting at the bottom of the well where he was super heavy. The water might be coming up. He wrote of nightmares and odd unrealistic coincidences and he said that strange coincidences happened to him.

Questions. He said that the translation of his books were good.
He said that  his stories were not planned and that he had no idea where the story was going. 'It is not fun to know the conclusions. I like to think, what's going to happen today. I like to be spontaneous.
'Imagination is an animal I keep alive.'

He said that once a book is gone, it is gone.
Why were his characters so sad? I didn't notice he replied, Everybody is sad.
He said he liked to write to music that runs through the novel.' I need music to write on - the harmony and rhythm is important to me to keep the readers reading. I need music.'


I am always looking for the right music to help to me write.,

Murakami is a serene and humble man. 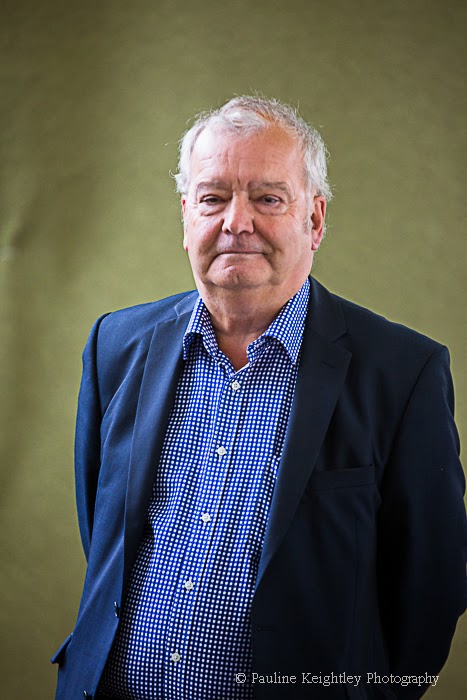 What went wrong? Major mistakes. Devine said that the Darien disaster of the late 1690s was over blown and exaggerated and his main claim is that the project failed due to poor leadership and that the proposed location for the colony should have first been properly surveyed. These projects required strict military discipline. He also said that at the time many colonies failed in the Caribbean and in the West, including the first English colony.


In 1698 five vessels left Leith with 12,000 passengers and travelled north round Scotland to avoid the Royal navy. It is a story of both courage and risks to the Isthmus of Panama.  The Caribbean was then a centre of piracy between France, Spain and England. The company of Scotland wished to trade with Africa and the West Indies. There were vast riches to be made in trade with the Spice Islands and with silks. Denmark acquired a colony there just 3 years before Darien. There was enormous opposition from England and the Bank of England withdrew its investments.

The Darien failure was cost thousands of lives who were burned in pits and included leader Paterson’s wife and son. Yet also at the time there were quite often devastating famines and death rates.  The after math of Darien caused a collapse in Scottish confidence and a cold embrace with England in 1707.  He said that there were three main layers around the Darien Disaster if you excavated below the myth.

(1) Unionist Myth. The Dominance of Unionist thought. That Scotland was a land of darkness, faction and poverty with religious rigidity and was bankrupt.
(2) Nationalist thought in 1960s and 70s, of historical victimhood – such as the Highland clearances, Glencoe  massacre and the Darien Project. .
(3) Modern Spin – which portrays Darien as a mad farce. The Darien project has been distorted. What happened was similar to the banking collapse in recent years. The Discourse of Prebble – victimhood nation, which recycled the feeling of misbelief and Scotland became portrayed as a mass deluded country that was small, poor and helpless.
He said it was wrong to view Scotland as naive and inadequate.  In the 13th and 14th centuries Scotland was very active trading with the European continent. There were 125 Scottish colonies set up and we were notorious at under cutting, with trading centres in Holland such as Rotterdam and Amsterdam. He said that Scotland was not naïve or inexperienced.

After the Union of the Crowns in 1603….., the fact that England did not support the Darien scheme proved to the Scottish that when there was a choice the English government would support English interests. The English refused to provide support, food and succour to the Darien project. At the time England and France were battling to control the Atlantic trade and England was desperate to defend its northern territories. Spain was then in decline.

After Darien a few were offered full financially compensation plus 43% interest if they agreed to the union, which was analogous with bankers and the RBS scandal of today – and that they then voted for the Union. However Glasgow and the Scottish people were against the Union. The Scottish Law and Church were left to be run in Scotland.

He called the Act of Union an the Act of Concession and not one of victimhood or biased prejudices.

PS On Saturday Tom Devine made the announcement that he was voting YES in the Scottish referendum vote in September. He gave his carefully thought through reasons that he sees  a flowering of the Scottish confidence in recent years.  He feels the union has now run its course.