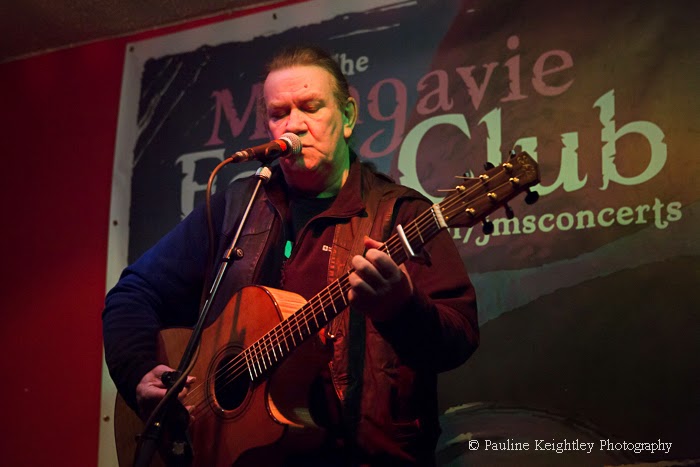 The folk club was busy for Gaughan’s return gig here with both young and older fans. He prefers to stand tall with his guitar as he plays and sings.

Dick Gaughan is a Scottish traditional folk singer, songwriter and guitarist. He sings of Scottish heroes and of stories of our lost past and long forgotten voices.  Gaughan has been playing the circuits both at home and abroad for many years now and he is a legend among folk circles. He is also one of the most down-to-earth and likeable artists without pretensions of any kind.

He sang songs by Brian McNeill, Robert Burns, Ewan McColl and Gaughan - What You Do With What you've Got, Yew Tree, Outlaws and Dreamers, No God and Few Heroes, Whatever Happened to We Shall Overcome, and the outstanding Burns song Westlin Winds. 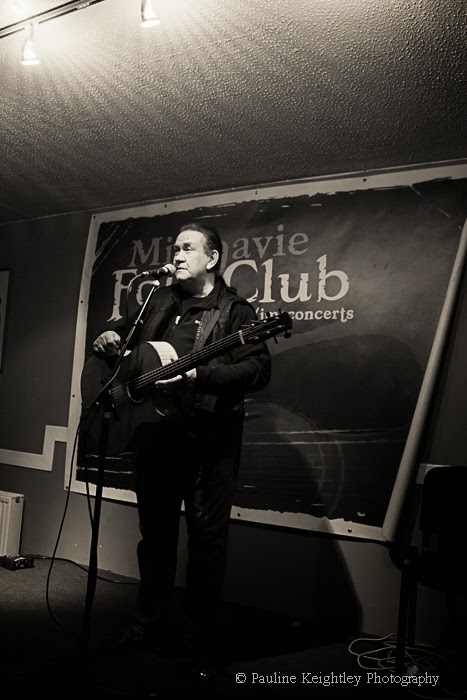 He prefers to learn from the generations before that have all the knowledge. ‘If you're lucky you can add a wee bit'   He said, 'I don't go for autobiographical songs, there's more interesting topics than me.’ He took traditional folk stories and songs from the library archives and put new melodies to them and he draws from both the Irish and Scottish folk traditions. He also spoke of legend songwriter Yip Harburg who wrote Over the Rainbow and Finnegan's Rainbow (who found a pot of gold and it destroyed him)

His songs can seem hard hitting but are also full of thoughtful optimistic themes. Like American folk singer Dylan his songs and voice don't come easily to the shore and they tell of straight talking stories. He is also a stand out guitarist and plays with a unique style with open chords and dramatic timing that he learnt from guitarist Davy Graham. 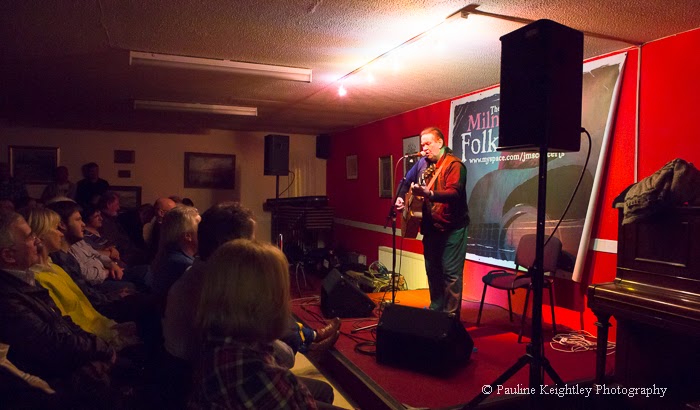 I first heard Gaughan play in the 70s in Edinburgh when I was dating a folk guitarist who raved about how incredible and very distinctive his playing was. Many years later I heard Dick again at Milngavie Folk club in 2007 and this was an intimate gig where his chat between songs was worth going for alone.


One of the great troubadours of life's journeys. You come away from his gigs questioning but ultimately renewed in the faith of our shared humanity. He sang, 'Keep your eyes on the road ahead, Keep looking at the light.... '
At this gig I thought - music is not about how good an artist might feel about their music but rather how much joy they can give their audience. 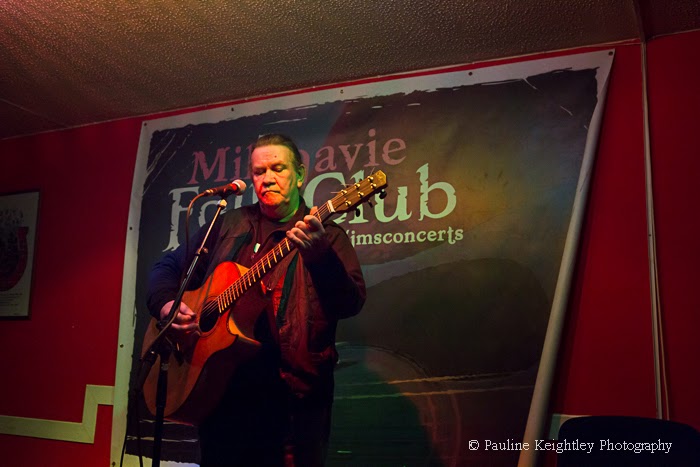 He sang not of resolutions but of holding on to your vision. Gaughan was warmly received and seemed to enjoy the gig. I felt that his substance, refreshing honesty and questioning words must have impacted on the younger members of the audience and on the older ones too!  Dick Gaughan Photo gallery - http://pkimage.co.uk/dickgaughan 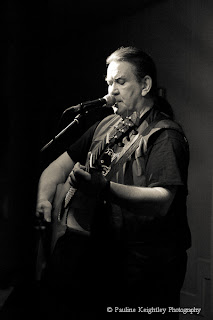 Gaughan talked about his musical influences. His chat is often profound, sometimes humorous and always entertaining.
He said that The Shadows were the first eclectic guitar group and that back then we were discovering all these new sounds for the first time. Before that nearly every American singer  seemed to be called ‘Frankie’ and sang songs about what it was like ‘to be a young lad at summer camp!’
Gaughan said that ‘Love Me Do’ from the Beatles was another defining song.

He became obsessed with songs - he was like a magpie and studied songs at the National Library. In 1979 the Thatcher government made him first think about ‘why’ he was singing the songs and he became a political artist then. He said that Traditional music is about fair play, the totality of life and about the community.
Nowadays the barrage of media attempts to put forwards ‘one’ message he claimed and he likes to be part of what he calls the ‘awkward squad’ who are the grain of sand in the ointment and have other ways of looking at reality - and try to at least think about it!
He spoke about Dylan’s beautifully crafted songs that punched out images such as ‘Subterranean Homesick Blues’. Gaughan played with Aly Bain’s Boys of the Lough and a punk band called Five Hand Reel. Like many others on the folkscene back then he developed a drink problem and then he had a breakdown. He had to clean up and dry up.
Lastly he talked about Davy Graham’s guitar which was tuned differently. His musical ideas were unbelievably creative - he was predictably unpredictable!  Hearing Graham's guitar it becomes clear where Gaughan had learned his distinctive playing style from. His list of favourite song choices is interesting too and shows the breadth of his roots in both traditions and more contemporary musical styles.

Gaughan is best known for singing the songs Both Sides the Tweed and Westlin’ Winds.
Some very few artists have the ability to transport and transcend the moment, and Dick does so with forceful guitar playing and classic traditional songs with a strong message and a deep expressive, growling voice.  He draws from both Irish and Scottish folk traditions. I first heard Gaughan play in the 70s in Edinburgh when I was dating a folk guitarist who raved about how incredible and very distinctive his playing was. Many years later (after being in America for nearly ten years and having three children) I heard Dick again at Milngavie Folk club in 2007, and this was an intimate gig where his chat between songs was worth going for alone. In his own so distinctive style, Gaughan hammers and speaks with his acoustic guitar. He performs traditional folk tunes, Robert Burns, favourite cover songs and his own songs.

He doesn't play the predictable smoothed-over sugar box 'tartan shortbread' songs - and he may not be to everyone's taste. Gaughan is plain spoken and holds firmly held beliefs on the rights of everyman and at one time he took past folk stories and songs from the library archives and put new melodies to them. You come away from his gigs questioning but ultimately renewed in the faith of our shared humanity. Dick Gaughan is a Scottish living legend, and he usually performs every January at 'Celtic Connections' Glasgow. 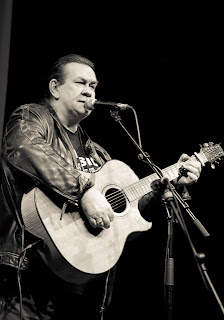