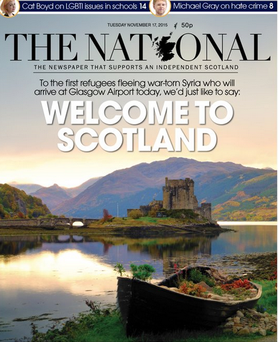 The National was begun in October 2014, after the Scottish referendum vote. We do not have a free press here.
Most of the Scottish press has been and is foreign owned (except for the Sunday Post)
We have no laws to protect Scottish businesses.

The National offers an informed conversation across the broad platform of views and from opposite ends of the spectrum of political debates. As well as some of the best journalists writing in the business today -
Kevin McKenna (Herald), Pat Kane (musician and journalist), Lesley Riddoch (Scotsman), Gordon McIntrye Kemp (Business for Scotland), Literature Professor Alan Raich, Paul Kavanagh (Wee Ginger Dug), Cat Boyd, Caroline Leckie, and more. 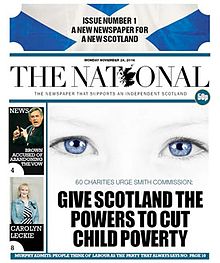 Thanks National – I enjoy your well informed, sometimes radical, thoughtful, humorous, challenging, academic, honest articles – on the economy, arts, Scottish literature (Alan Riach), politics, humour and more! That are not full of gossip, innuendo, advertising as some other newspapers are. The press still matters because it informs Broadcasting.

Many excellent letters also - one recently suggesting Scotland and England needs a new "Treaty of Union" as the 300 year one is not fit for purpose. This was always a union of convenience and not love. Scotland has been offered and voted for its Home Rule many times. During the Great war 1914, Britain has become heavily centralised.

Although lots of Scots support our self determination (around 45%) we only have one newspaper supporting independence.
97% of Scottish broadcasting and press is controlled by the British nationalist government. The figures are stark, of TV license money only 55% raise in Scotland is spent here – by contrast 75% and 80% are spent in Wales and Northern Ireland. Its a shocking state of affairs.

“If Scotland had a media as diverse and representative as Catalonia, we’d already be independent.” Wee Ginger Dug
All the other devolved nations have their own public broadcaster, the British state is expert at suppressing others they rule, they've had centuries of practice at it..... We have to choose now - the 'money-driven capitalist system of Westminster' OR the kind of Scotland, more compassionate and caring, we want to build from the local level upwards. 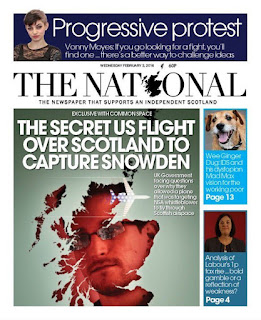 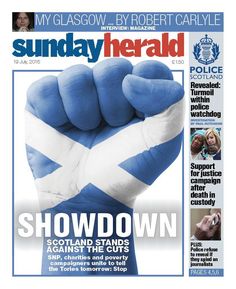 The animosity will be reduced once England understands Scotland’s resentment at the historic overlordship of its affairs by absentee landlords, American tycoons and paid servants of the Imperial war machine (…and oil money used for Trident and useless aircraft carriers)

Excellent series this week on “THE GREAT OIL SWINDLE – by Alex Russell” in the National,

(Scottish Questions is dreadful – other MPs speak over it.  David Fluffy Mundell tells lies – one is over the tiny amount being given to Aberdeen – 2 million! )
When the truth is that Scotland’s Oil and Gas has been stolen and squandered by an incompetent Westminster.  In fact Scotland back in the 70s had as large an oil field as Norway – yet through extreme mismanagement only a half has been recovered compared to Norway.  The McCrone Report which stated Scotland would be one of the richest countries, was kept Top Secret for decades. It’s a shocking scandal.  Instead of the money going to Scotland it has gone to the multinational Oil Companies and into the UK government coffers for London infrastructure and for Trident.

“The total UK Government take from the North Sea Oil and Gas is of the order of 400 billion – but that figure is approximately a half of that obtained by Norway for similar production volumes. Logically, that might mean the take of oil companies has been disproportionately high due to Westminster mismanagement.
Now the UK government is asking tax payers to foot half of the bill to decommission the installations. They will be leaving rusting protruding legs with little red flags attached to alert fishing boats and nuclear submarines – to save these mega rich oil companies money. Never mind all this rubbish is far removed from London.

Investigative Journalism is crucial. More than ever in turbulent times it is essential to read competent investigative journalism.

By contrast there is ‘mass media persuasion’. – which is from ‘Rulers’ who want power and don’t want dissent. Newspapers or tabloids like Daily Mail or Daly Express or Sun are emphatically NOT about presenting balances views (as some older voters believe) and they are controlled by the British establishment. They present only one point of view.

Literature is also about many diverse voices. Excellent article on the importance of the Arts and literature is particular, by Glasgow university professor Alan Riach on the Power of Mass Persuasion. (The National March)

Recently the New York Times and the Washington Post have had a surge in subscribers as Americans seek to find out what is really going on.

The National Newspaper runs Investigative Journalism.
Some may falsely believe the National is only one point of view – it is not! It carries right and left articles, in depth articles by Professors and experienced political journalists.

Channel Four news uses investigative journalist – in recent days they have been interviewing non-politicians and commentators, to look seriously at the issues around Scot Ref and Brexit. Rather than empty Political Rhetoric. They have uncovered Tory over spend in election.

As a direct result of the 2008 economic crash, after which nothing has changed in the UK, people are desperate for change, any kind of change!  The trouble is the far right has taken over arguments with blaming immigrants!   They mix immigrants numbers with people we need here – students, EU workers, and with Refugees.

The best way to have debate is through informed discussion, and NOT by throwing around insults. Politicians need to learn this too and they dont' in Westminster that's for sure!