Who Would I Honour with a statue? 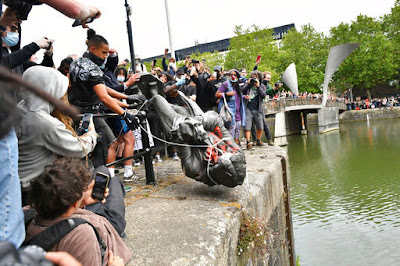 Who would I honour with  a statue?  This is a list of writer and others that I particularly admire.: The names that come to mind are – Robert Burns,  Thomas Paine, Orpah Winfrey, Maya Angelou, Rembrant, Michelangelo, Mozart, Bob Dylan, Bach, Mary Somerville, Thomas Muir, Elsie Inglis, Constable.
Recently people threw the statue of slave trader Edward Calston, into the river.

I’m glad to see a statue to James Clerk Maxwell, the great physicist in Edinburgh’s George St.
I attend Edinburgh book festival each year and one of the great aspects of this festival is that merit it accorded to those who achieve rather than to any empty celebrity.

Recently I watched a tv program about the mega rich and their massive yachts. I wondered about the French revolution – when they over threw a greedy aristocracy – but they simply escaped and instead of stately mansions set up massive yachts.

Kevin Pringle argues we should have dynamic, on going debate on whether any statue in a civic space, continues to be relevant to todays world. That society is not static or unchanging. Also that the Edward Colston statue removed Bristol was no longer relevant. He suggested in 2003, that the Duke of Wellingtons statues in Edinburgh’s Princes St, should make way for one of Scotland’s national bard, Robert Burns.

In a recent survey Burns was voted as Scotland’s no 1 hero. I was surprised to realise his Edina statue is down the bottom of Leith walk, removed from the city centre. There are more statues to Burns in America than of any other writer and he is honoured and respected world wide from Russia to Canada. (Mind you maybe Burns would rather stare up from the coast!)

In Belgium, statues of the tyrant Leopold II are being removed. Pringle writes of the diplomat Roger Casement “who was knighted for exposing atrocities 1904 in the Congo and was later hanged by Britain for championing Irish insurrection. People are complicated, and no statues can ever capture that.” 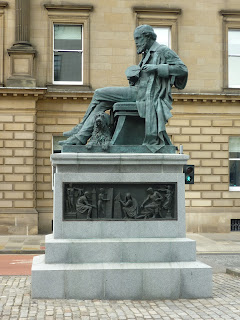 **Who Would I Honour with a statue?

Thomas Paine -  English-born American political activist, philosopher, political theorist, and revolutionary. He authored the two most influential pamphlets at the start of the American Revolution and inspired the patriots in 1776.
Robert Burns  – Scotland National Bard
Yes he was a flawed man – but he also put his creativity and egalitarian views, and collecting Scotland’s tradition of song and ballads, as his main creative genius.

Thomas Muir - Great reformer of the Friends of the People.,
Scots lawyer Muir defended many others until he found himself a wanted man. He was arrested on landing at Portparick. and taken in chains through Gatehouse of Fleet to Dumfries and on to Edinburgh, where he was tried for sedition. He was found guilty and sent to Botany Bay. Later he escaped and made it over to Vancouver island and Monterrey bay – then on to Mexico and got caught up with a naval fight in Cadiz harbour, where he ahd half his face blown off. He died near Paris, aged only 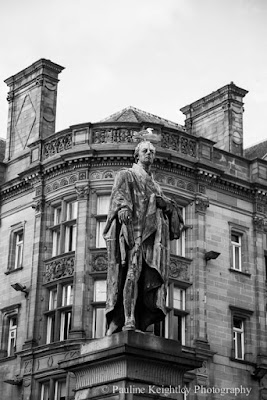 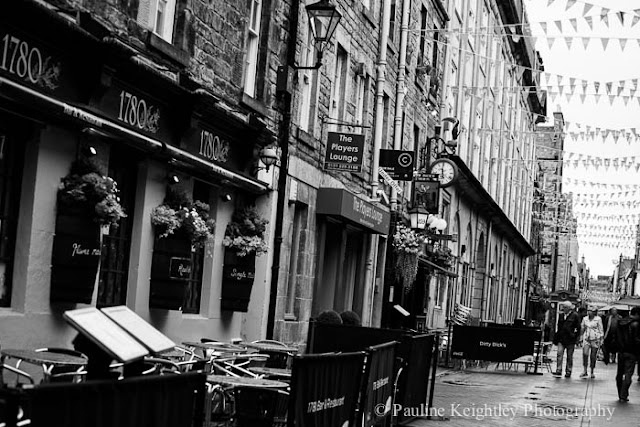 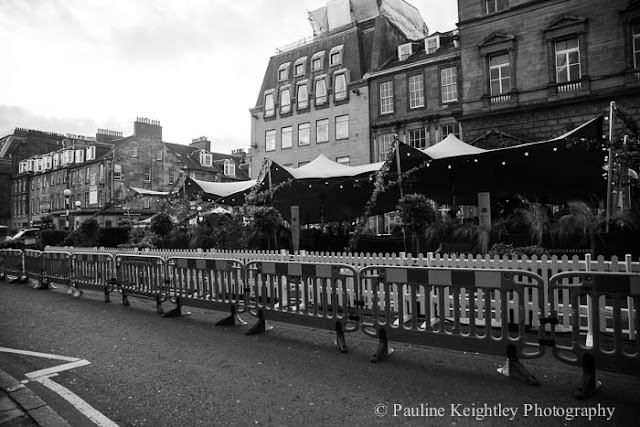 On Rose street I pass the old hotels such as the Kenilworth. From my first Edinburgh festival images I decide to focus on the old and the new. – the way they sit so cleverly side to side in Edinburgh’s historic lanes, closes and stairways. A town built on hills always has its long range views. It is good to venture off the main pavements – where you can see the unexpected. Edinburgh is a good place for walking and cycling – and with the castle, gardens, dips and valleys – often easier to get around than by car. At Biblos restaurant I remember they play an original playlist – how nice.

There is now Blackwell’s where Thins bookshop used to be. Beside the Scott monument is a large Ferris wheel. There are now large maroon and white trams running along the centre of Princes street. 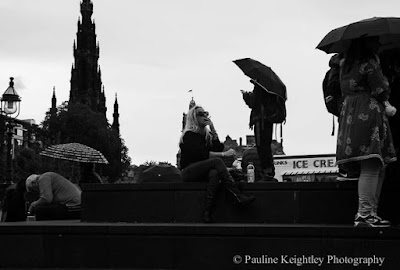 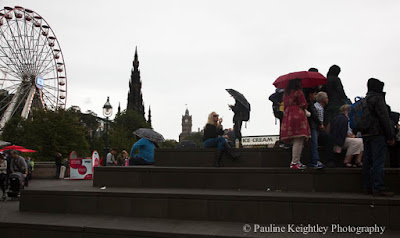 I walked up the steps from the galleries of the mound, which take you quit suddenly from the busy thoroughfare of Princes street to the Edinburgh old town. Instead of heading to George IV bridge I decide to take the old steps past the Lady stairs close and the tiny turret of the Scottish writers museum. There is a plaque which states that when Burns came to live in Edinburgh, shortly after his first book of poems was published, he lived here in the close. It is very near to the castle and these hidden places are very unexpected. Burns must have felt right at the heart of things. It must have felt like a bustling cosmopolitan place to the Ayrshire born lad. Here he became the toast of the Edinburgh intelligencia class. 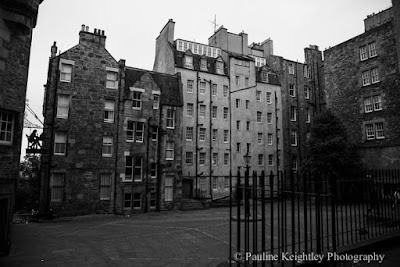 I walked past the statue of William Pitt on George street - a seagull sat on his head. In 1783 Pitt, at 24, became prime minster. There was a great deal of corrupt government he claimed he’d reform, but on gaining office he put all these thoughts aside. Nothing ever changes....There is also a statue on Hanover street to King George who came to Scotland and even wore a kilt here. I also passed Martyr's monument Edinburgh I read of the radical Thomas Muir - an incredible Scot - who along with others, set up the Convention of the Societies of Friends of the People in 1792 and dared to march for democracy. For which he was sent by the then Scottish Secretary of state to Botany Bay. A true radical thinker.


Each year I travel over to Edinburgh for the August festival. It’s one of the highlights of my year.
Edinburgh is known as Auld Reekie. I grew up here and walked its historic streets without realising all the stories around me. Perhaps I sensed then though along the winding closes; the tall narrow buildings; the elegant Georgian new town; and always the castle high street that led over to Arthur street and the distinctive historic skyline. 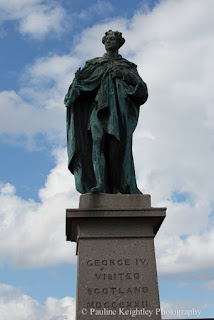