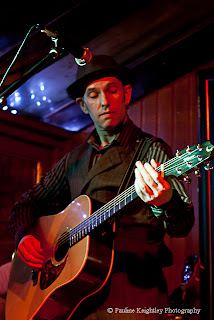 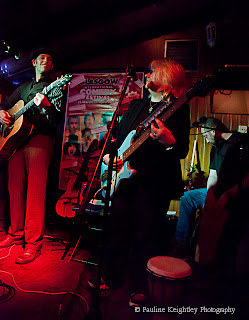 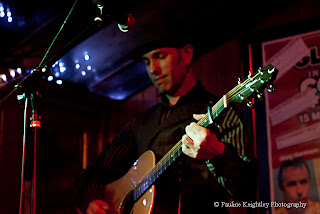 On a wet Glasgow night Jim Byrne and his band brought colour to the dull February days with enriching and soothing sounds..
The Bar Brel was full and cosy and I took a seat near the front in the hope of getting some good shots. This was the CD launch for Jim’s new set of tunes for his album The Innocent and he was accompanied by the Blackwood’s which consisted of Graham MacKintosh (banjo, violin), Elanor Gunn (violin) Dinny (guitar, harp and vocals), and Peter Bryne (bass, percussion, backing vocals). The band all did a very good job of backing Jim’s deep soothing bluesman vocals.
Stand out songs were requested - Two Empty Chairs, Sand in Our Shoes, and cover song Thirteen. I enjoyed the gypsy guitar vibe of Down by the Wildwood, after which Bryne took the temperature down with the comforting Sweeter than a Rose and the earthy Sand in Our Shoes.  He sang the covers Thinking Tonight Of My Blue Eyes, Satisfied Mind ( Joe "Red" Hayes), There Stands The Glass (Russ Hull, Mary Jean Shurtz and Audrey Greisham) and a fun Make Me a Pallet on the Floor. His cover songs are well thought out as are his own songs which show his obvious love of music.
Jim’s music has a warm nostalgic feel and their set was very much in Jim’s chilled out late night groove style.
I am impressed with the way Jim maintains his Scottishness while taking on his American folk and blues influences. His sound draws on diverse influences such as Johnny Cash and Tom Waits, as well as other lesser known folk artists. Jim Byrne is a singer songwriter influenced by Americana, folk, alt-country and blues music.
Byrne has an expressive voice and slightly eccentric songs making for a distinctive sound. He steered a calm ship with his quiet relaxed manner and smile which filters through his mellow country tunes and quality guitar playing.
His new album has a cover by Susanne McGreevy and is called The Innocent. It has more atmosphere and is a step on from his well received previous album "Every Day is Sunshine.” The Innocent has an earthy sound and his songs have quirky and unexpected lyrics. The backing musicians play a wide variety of instruments on the record which adds a rootsy sound with a richer depth and with more fluid soundscapes.
A highly enjoyable night and I recommend checking out Jim's latest offerings.
Dinny sang a few of her own songs as the support slot and she has a very good voice with a pure quality to it as well as being a talented guitarist.  http://songsbyjimbyrne.com/ 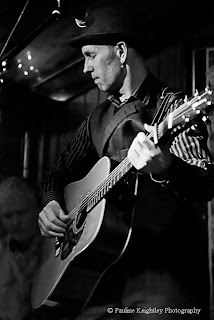 As on Jim's previous album, he's joined by some of Glasgow's best musicians, notably Yvonne Lyon (delicate piano on Sleepy Head) and virtuoso guitarist and banjo picker Graham Mackintosh (Satisfied Mind, Thirteen). Jim’s brother, Peter Byrne, adds harmonic richness on backing vocals (check the chorus on Sand in your Shoes) as does Glasgow singer songwriter Dinny (Two Empty Chairs, You Are A Good Friend Of Mine).
Set List Fancy Wooden Box
Tell Me You Love Me Again
Down By The Wildwood
Thinking Tonight Of My Blue Eyes
Satisfied Mind (cover song by Joe "Red" Hayes)
Thirteen
Sweeter Than A Rose
Sand In Our Shoes
II
You Dont know
There Stands The Glass
Two Empty Chairs
When You Bit Into That Apple
Make Me down A Pallette On Your Floor
The Handle's Broken On my Cup
Daddy's Car