The Referendum and the Open Revolution #indref 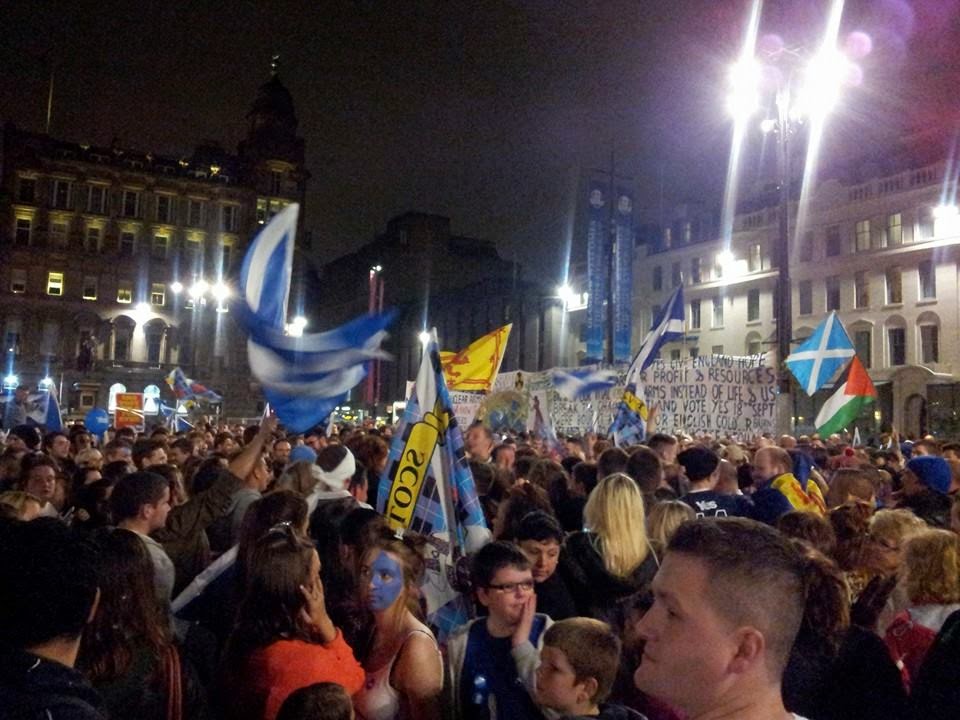 I met many interesting women and men activists for Scottish independence in 2014. I believe like the Greens, that independence is the only way forward for Scotland to achieve devolved and de-centralised governance - this does not mean rule from London moving to rule to Edinburgh. This means more voices for the Highlands and Islands and for Perthshire - with more local radio and improved local infrastructure.

The Better Together side knocked on old ladies doors during the referendum campaign and told them that they would loose their pensions and their pound.  The unionists also had nice catchy phrases for those who can't be bothered to read up on the issues.
1) Pooling and Sharing Recourses - which meant pulling resources into London and giving us pocket money in return.
2) Best of Both Worlds - supposedly meant a prosperous Scotland within a strong UK but actually means a dependent weaker Scotland in a more fragile union.
3) Solidarity cross borders means solidarity with Osborne's Austerity, the big Banks and Big Business.

A democratic conversation has developed in Scotland in 2014. As the divide between rich and poor has widened greatly the past few decades, it is imperative we have this conversation for democratic change.
There is much work to do towards land reform, de-centralize government, improve access to quality education (especially in the early years) and to reducing housing rents.

A younger generation woke up to political engagement and activism and on social media they are not easily fooled by fear campaigns or lies and they are not afraid. They now express their voice on online websites such as The Common Weal, National Collective and Radical Independence Convention.

Unionist may try to claim the referendum was all simply a blip from normality, but they simply miss (or ignore) what the energised movement in 2014 has been and is all about. They claim the debate was bitter and divisive (being
against change) - while if you are for democracy and a fairer more equal society, then informed energised debate is a huge positive.  Meanwhile those doing quite well thank you, mostly voted against change - no surprise there then.

Ian Bell (The National 31.12.14) writes, the fear fell away and we saw through the false facades  of unionist claptrap.  Like Bell, and as one who also voted for a Scottish Assembly in 79, I was astonished by the weakness and shameful tactics of the Unionist side. Their slogan of  'No Means No' as the best they could come up with. The case for Britain and the union was meekly shown as a black and white ad for nostalgia for the past war and past glories.
The new generation don't care about that and it does not effect their futures. Bell feels we should say more why Scots would not want to be British. Monuments and looking backwards do not take us forward to a hopeful future.

The Smith Commission, while set up to establish ‘extensive new powers’ has only offered devolved Income Tax, which cannot easily be varied and therefore effectively meaningless. EVEL (English Votes for English Laws) further weakens the Union, and with the Conservatives hope for SNP successes to weaken Labour in Scotland.

Writing in the Times (28.12.14) Jenny Hjul wonders why Unionists haven't been celebrating their hollow victory - there's a clear reason for this and that is that a campaign waged on fear and lies does not lead to harmonious or happy outcomes. It makes not only a mockery of voters but is also illegal.

The Yes side campaigned positively for an inclusive, more equal society, both ethically and culturally. it took the moral high ground campaigning against food banks, child poverty and the out dated ‘them and us’ culture.
The nationalists have hijacked the conversation with the yes sides’ positive campaign. Meanwhile Scottish Labour is now a Monument rather than a Movement.

Iain MacWhirter compares 2014 to the Summer of Love in 1967 - when social and political landscapes were changed forever, ' The old order of deference, conformity, convention was swept away by a colourful tide of positivity and sometimes wacky togetherness.'

Scottish Independence is a journey we have taken massive leaps towards. As it becomes clearer and clearer how unworkable devolution is - and with the SNP, Greens and others now holding the narrative, it is only a matter of time on the road to Independence.

Ten years ago I wondered was devolution enough but not today. Scotland's voice has woken up from centuries of silence and apathy and of believing our voices made no difference - and will not now be easily silenced. Many now realise they can have a voice and can shape their future.