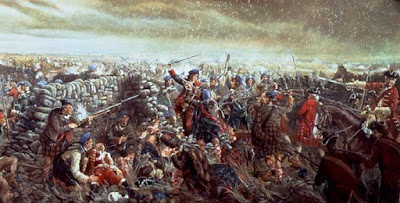 There are false myths of Gaelic traditions and of the battle of Culloden.
I have been shocked over how much Scottish history is misrepresented and badly taught (if at all actually!) Our true heritage matters greatly for how we feel about our confidence in our country today.

I grew up in Edinburgh and I have always believed that the battle of Culloden 1746 (near Inverness) was a big defeat of the Scots by the English with a great many Scots killed.
It turns out that the battle was part of a civil war and a religious battle between Protestants and Catholics.

When Queen Ann had no successors to protect the stability of Protestantism and because of concern over the wars with France - the English parliament brought over George of Hanover to succeed her. On the Hanoverian side were English, German and Scottish troops.

On Charles Edward Stuart’s side (Bonnie Prince Charlie) were Scottish, French and English troops. For instance the MacDonalds of Skye were on the Hanoverian side. Considering the importance of the Protestant movement in Scotland much of the Scottish Lowlands did not support the Jacobites (John Knox 1514). There was also an English Civil war of 1642 – 1679, between cavaliers and roundheads.
Culloden was a marshy moor land and Charles would not listen to advice. This was the last major battle on Scottish soil. After the battle the Highland clans were suppressed. Gaelic culture was suppressed by the UK government after the 45, with the Act of Proscription to break up the clans and prohibit the wearing of tartan. I believe Scott helped to revive Scottish culture with his books. In 1822, Walter Scott, author of Waverley, a story of the 1745 Jacobite rebellion, arranged a pageantry of Scottish traditions for the visit of King George IV to Scotland when the monarch dressed in a kilt. The tartan pageantry was popular and the kilt then became Scotland's National Dress.

Gaelic speaker Coinneach Maclean The nephews of the great Gaelic poet Sorely Maclean, has been writing up his thesis at Glasgow university and he has been lecturing on Gaeldom. After studying for a tourist guide qualification at Edinburgh university, he was shocked at the total lack of Gaelic history in the course. In fact he claims the tourist course was full of factual errors. Tourism is a big industry for Scotland and it matters greatly that correct and authentic accounts are given to visitors.

According to Tom Devine the Episcopalian church were greatly worried about the Union and many were Jacobites. Religion played a much bigger part then today.

Has Gaelic culture been written out of Scotland’s Story? David Ross, The Herald.
Coinneach Maclean, former deputy chief executive of the National Trust for Scotland and acedemic, says the country is squandering an irreplaceable heritage while making billions from it