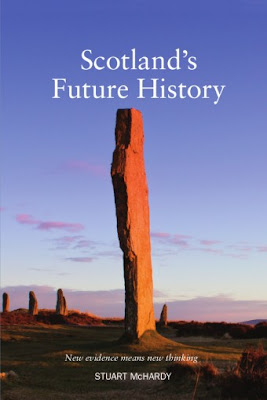 Scotland's Future History by Stuart McHardy was the one of the most interesting books I bought at Edinburgh book festival. He writes of Scotland’s lost mythology and stories. He states that In books on Celtic Briton there is no mention at all of Scotland’s clan system – while there is mention of Ireland’s Celtic heritage. The past centuries Scottish history and culture has been repressed, misrepresented and ignored.

This book is a short guide that raises several issues that include  - the Brodgar of Ness site recently found in Orkney of an ancient temple older than Stonehenge or the Pyramids and the largest Neolithic stone structures in Britain - over 10,000 people attended cermonies here.

The Kilmartin Glen ritual stones; Highland Tales; the Jacobites after Culloden; of the influence of the German speaking Norse settlers, the indigenous  PIcts and of the radical Thomas Muir.  He writes of the Scottish cultural resurgence the past fifty years. He claims that civilization as we know it, did not begin in the south and then travel northwards.

Scotland is one of Europe’s most ancient countries. McHardy argues Scottish history is quite different to England’s. Scotland was never ruled by Rome or by the Norman knights. England by contrast was ruled by Rome for over 400 years and the Normans brought the feudal system. In Scotland though the clan system survived. After the 45, the highland clans were crushed, but never went away. The Jacobites were in fact a more complex narrative and partly a religious war.

Even so the Union has been presented as a union of partnership of equals - not as a defeat or that Scotland was ever a colony. He writes that the term “War of Independence’, when Bruce eventually won the Battle of Bannockburn in 1314, is a big insult – as Scotland was a country before England – and has never been a part of England. We never had to win our independence. Oddly information on Scotland from 1740 – 1760 is only held in libraries in Michigan, Illinois, Iowa, Texas and Australia – and not to be found in any Scottish libraries

He writes of the radical Thomas Muir - an incredible Scot - who along with others, set up the Convention of the Societies of Friends of the People in 1792 and dared to march for democracy. For which he was sent, by the then Scottish Secretary of state, to Botany Bay. A true radical thinker. He is better known abroad than here in Scotland. He was one of the Scottish Political Martyrs. He escaped from Botany bay, which was virtually unheard of.

The Scottish clans were about loyalty but not subservience to the clan. in other words, there was a clan chief but he was not above - it was more about pulling together for the common good. There stories matter. I used to believe Scotland's political beliefs today, of greater social equality, were firmly rooted in Presbyterianism and education for all. I now believe that Scottish social justice runs much deeper than this. McHardy suggests we should stop all this teaching of Roman empire building, encouraged by the elite to perpetuate myths of superiority, and start to look at other stories of working together instead. The most successful and happiest countries are not those that subjugate and keep down-trodden one segment of society, as if the pie is too small to be shared.

In 1997 there was a conference at Moray House college on the teaching of both the Scots language and Scottish history in Scottish schools -  introduced in 2011 in the Curriculum for Excellence - the first time Scottish history in our schools curriculum. Since 1872 only the English language has been taught . Both the Scots and Gaelic language – mother tongue are now allowed to be taught.

I grew up in Edinburgh and I even had a head master from Skye who wore a kilt (quite rare back then) Even so we were taught all these ancient stories of Egypt, Greece, Rome and London – as if our own ancient stories were far too boring. Once we were told the story of Bruce and his spider and of Mary Queen of Scots, but otherwise the rich and ancient stories of Scotland were ignored. It seemed that we should be ashamed and embarrassed of the Scottish stories.

STORY arises out of communal activity and has a resonance that the written word cannot aspire to. McHardy believes that both history and story must be evaluated by critical thinking. McHardy argues that Scotland is not a peripheral backwater.  Scotland retains her stories – If this is your land, where are your stories. The idea of who we are and where we come from is important. It informs our sense of self and gives us confidence. He argues that we must look here – and NOT to Rome, Athens, Cairo or London.

**He claims that the metro provincial London media and of the MSM (Main stream media), with it's drip-feed of limited right wing news - has replaced what religion used to do  as the means of keeping people suppressed.

Interestingly in the popular TV series and books, Game of Thrones, the Wall is based on RR Martins experience on Hadrian's wall - when he thought about the Roman soldiers being posted there so far from home. South of the wall is Kings Landing (England) - north of the wall are the Wildlings (Scottish) who are free (but being attacked by Norse invaders (the White walkers) . Martin is a keen reader of Scottish history and he clearly felt and understood the divisions between Scotland and England. I attended Martin's talk in Edinburgh.

Scotland's Future history by Stuart McHardy - Scotland's history is changing. What pasture of the Scottish past should we pass on to future generations?
"There is a subject called British history, but as far as I can discover it consists of English history, with an occasional side-glance at Scotland at times when Scotland crossed England's path. This is a society devoted to the study and furtherance of Scottish history, and it seems a little odd to me that this educational policy should still prevail. It is calculated to condition the Scottish mind into turning instinctively towards London with the submission of the Moslem turning towards Mecca."  Lord Cooper, President of the court of Session, to the Scottish history Society 1948.