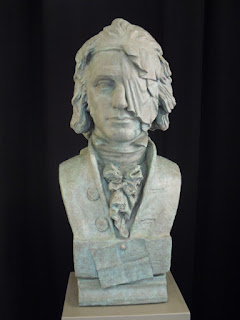 It is strange how one story can lead on to another.  When I attend Edinburgh festival I hear many stories - and the one on Thomas Muir (1765 - 1799) stood out this year. I had never heard of Muir, even though I grew up in Edinburgh and not only studied higher History, I also taught history in primary schools! Muir came from Glasgow, studied Law and later worked in Edinburgh.

I passed Martyr's monument Edinburgh and a statue of William Pitt with a bird on his head in George street. I read a great read - 'Scotland's Future History' by Stuart McHardy. He writes of the Scottish cultural resurgence the past fifty years. He writes that the term “War of Independence’ is a big insult – as Scotland was a country before England – and has never been a part of England. We never had to win our independence. Information on Scotland from 1740 – 1760 is only held in libraries in Michigan, Illinois, Iowa, Texas and Australia – and not to be found in any Scottish libraries.

I read of the radical Thomas Muir - an incredible Scot - who along with others, set up the Convention of the Societies of Friends of the People in 1792 and dared to march for democracy. For which he was sent by the then Scottish Secretary of state to Botany Bay. A true radical thinker, he was one of the Scottish Political Martyrs. He is better known abroad than here in Scotland. He escaped for Botany bay which was virtually unheard of.

McHardy writes of Scotland’s lost mythology. In books on Celtic Briton – there is no mention at all of Scotland’s clan system – while there is mention of Ireland’s Celtic heritage.  In 1997 there was a conference at Moray House college on the teaching of Scots language and Scottish history in Scottish schools and introduced in 2011 in the Curriculum for Excellence. The first time Scottish history in our schools curriculum. Since 1872 only English language taught . Both the Scots and Gaelic language – mother tongue are now allowed to be taught.

As I was reading of Thomas Muir it all sounded so familiar to today. We still have this privileged Eton elite that works to maintain their own interests.

It feels sad that nothing much has changed the past two centuries since our poet Robert Burns - who tried to imagine a better world for all, with his words such as "A Man's a Man for a that." ..

When Burns wrote his poem ‘Scots Wa Hae’, in a footnote he wrote how he had been inspired by Bruce's "glorious struggle for Freedom, associated with the glowing ideas of some other struggles of the same nature, not quite so ancient."
Burns may even have met Thomas Muir in Edinburgh - was he writing about the Scottish free thinkers who dared to march for democracy?

A few days later I read Michael Gray’s report in the National newspaper on an artists’ portrait of Thomas Muir being unveiled at my local art gallery, Lillie Art Galleries, snd also of Alex Salmond’s recent talk on Muir.
Strange how one story leads to another really…..
Stuart McHardy – Scotland’s Future History
This book is a short guide that raises several issues that include  - Brodgar of Ness site recently found in Orkney of an ancient temple older than Stonehenge or the Pryamids, the largest Neolithic stone structure in Britain; Kilmartin glen ritual stones; Highland Tales; the Jacobites after Culloden; of the influence of the German speaking Norse settlers, the indigenous  PIcts.

"There is a subject called British history, but as far as I can discover it consists of English history, with an occasional side-glance at Scotland at times when Scotland crossed England's path. This is a society devoted to the study and furtherance of Scottish history, and it seems a little odd to me that this educational policy should still prevail. It is calculated to condition the Scottish mind into turning instinctively towards London with the submission of the Moslem turning towards Mecca."  Lord Cooper, President of the court of Session, to the Scottish history Society 1948.  MORE on Stuart McHardy's excellent book in a separate blog.