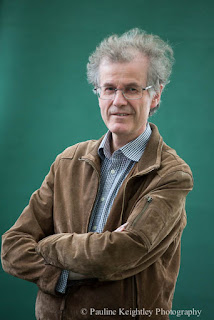 I recently enjoyed reading Crawford's excellent biography on the Scottish poet Robert Burns. He demonstrates that he has a sensitive clarity when writing on the great poets.

Robert Crawford, who is a Scottish poet and lecturer at St Andrews university, gave a informed and highly interesting talk on the young TS Eliot at Edinburgh International book festival 2015. He felt that Eliot's early years were often ignored in the biographies of the famous American poet who ended up living in London.

'Young Eliot: From St Louis to the Wasteland'.
He stated that he hoped in his book to dehumanize Eliot, who had to face up to his own woundedness and breakages.  Crawford said he would go into lecturer mode for his talk when he stood at the lectern.

He gave us some background on Eliot's formative years. Eliot's mother was a poet and his father a business man. He lived his first 26 years in St Louis in the late 19th century. At school he edited and wrote a magazine titled The Fireside.
Eliot attended Harvard in 1906, which also transformed him greatly. He later studied Philosophy at Oxford and Paris.

Crawford spoke at some length of a poem the 'Love Song of Harry Prufrock', one of Eliot’s greatest, which was based on a family he knew in St Louis. 'that is not it, at all. ' Eliot liked his poems to insinuate music.

He later moved over to London at the age of  26 and there he met Ezra Pound.
His poetry draws heavily on the American landscape and speaks of the banks of the Mississippi river  - 'the strong brown God'.  Crawford said that when he stood next to the muddy brown Mississippi river he felt closest to Eliot.

T S Eliot, was an essayist, publisher, playwright, literary and social critic, and "one of the twentieth century's major poets". He was born in St Loius, to the old Yankee Eliot family descended from Andrew Eliot, who migrated to Boston, Massachusetts from England 1660s. He emigrated to England in 1914 (at age 25), settling, working and marrying there. Eliot attracted widespread attention for his poem The Love Song of J. Alfred Prufrock (1915), which is seen as a masterpiece of the modernist movement. It was followed by some of the best-known poems in the English language, including The Waste Land (1922), The Hollow Men (1925), Ash Wednesday (1930), and Four Quartets (1945). 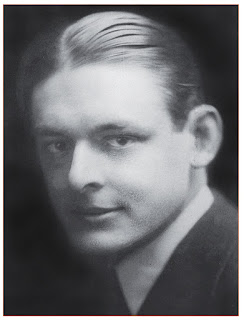 
When the evening is spread out against the sky
Like a patient etherized upon a table;
Let us go, through certain half-deserted streets,
The muttering retreats
Of restless nights in one-night cheap hotels
And sawdust restaurants with oyster-shells:
Streets that follow like a tedious argument
Of insidious intent
To lead you to an overwhelming question ...
Oh, do not ask, “What is it?”
Let us go and make our visit.

In the room the women come and go
Talking of Michelangelo.

And would it have been worth it, after all,
After the cups, the marmalade, the tea,
Among the porcelain, among some talk of you and me,
Would it have been worth while,
To have bitten off the matter with a smile,
To have squeezed the universe into a ball
To roll it towards some overwhelming question,
To say: “I am Lazarus, come from the dead,
Come back to tell you all, I shall tell you all”—
If one, settling a pillow by her head
Should say: “That is not what I meant at all;
That is not it, at all.”